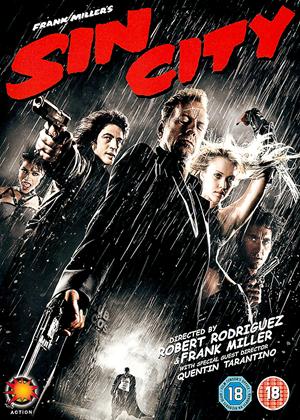 Based on the graphic novels of Frank Miller, 'Sin City' is a masterpiece of cinematography with a perfect cast and action that will hold your attention from start to finish. Shot in a black and white cartoonish style, utilising splashes of colour for special emphasis, this original unique style is accompanied with a narrative that allows the viewer to willingly suspend disbelief and enter into the dark and ultra violent world of Sin City. If you like non stop action, great acting with an engaging plot, and a movie that sets new standards in cinematography, then Sin City is a movie that you will definitely not want to miss!

Even if you're not a fan of film noir or 'graphic novels' this film is well worth watching to see the exciting way that these forms have been blended on screen to produce such a visually intriguing story. The plot weaves a few individual stories together, nothing groundbreaking there, but the style really brings them to life.

After all the hype surrounding this film I was really excited to watch it. But what a disappointment. This film is terrible, the storyline is only just worse than the acting. Would not recommend at all.

Stunning picture quality, lavish extras and a really enjoyable, faithful, comic book adaptation that puts others to shame. The theatrical cut is good enough, but watch the extended version after that and you'll see more depth, additional characters and backstory being added. The extras comprise of everything from several commentaries, to a green screen high-speed version of the film or even Robert's recipe for breakfast tacos!

I have to agree with the review on here, I know it's shot with CGI, but what a stunning way to blend the acting, film noir, comic books, and a host of hugely talented and high profile crew.The film itself? Pure comic book. But don't let that stop you, there are scenes of movie brilliance, too many, like the frames of a comic book, scenes just come at you with vigour and hidden depths. It could have been more but if it was, there would be no reason to ever watch another movie, ever again.

However, appreciate it for what it is, a showcase of creativity, acting, talent, direction and immature dreams of adulthood blended into a slick viewing experience.

Superb film. a little confusing in the middle - Sin City review by Darren

This is a really good film. Most of the time it is in black and white but uses the highlighting effect similar to the red girl in Schindler's list, but does it a lot more and to a greater effect, there are numerous bits they do this and possibly just watch for the girl with subtle green eyes to see this effect being used really well.

The entire film is two different stories in two halves and in the middle you think your watching a totally different story. But at the end the producer brings you back into the first story but also cleverly merges characters into it from the second story through the use of hints of colour and then the whole jigsaw all starts to fit into place.

I watched it on my 64" projector screen and this produced a really good viewing of the film.

Boring and silly - Sin City review by none

Yes, visually it's interesting, and I like the comic strip genre. Technically very well done. But the plot, or plots - as they don't tie together as they could - are, well, just pathetic. The threads of the various stories seem totally random and little if anything is achieved by the end. It left me wishing I'd gone to bed early instead. Very disappointing after everything I'd heard about it. Overly long, and an utter waste of time.

Wow, stunning, absolutely stunning and man do I wish I had seen this on the big screen to get the full impact of the movie.

The cast (and what an ensemble) are for the most part excellent, Bruce Willis playing a muscle man with a heart, obsessed with a dead hooker (or is she?) Micky Rourke, (barely recognisable)

plays another big man that gets involved pursuing a grizzly serial killer, and Clive Owen who tends to vary between mediocre and poor in some films (King Arthur for one) shines here as a man framed for the killing of a cop.

Jessica Alba plays a stripper, but perhaps is under used but she sizzles with a sultry sensuality when she's on screen. Black and white for the most part, with a splash or two of colour this film is visually stunning, visceral and at times vicious but at the same time engaing and compelling, capturing the mood of Frank Millers graphic novels superbly.

Good nes is this film is worth more than a look, it's worth savouring, better news Sin City 2 is on it's way, if it's half as good as this then it's gonna be good.

NOTHING CARTOON ABOUT THIS ONE - Sin City review by CP Customer

I remember reading the graphic novels years ago- watching this film was like reading them again. Frame by frame. The cinematography and the whole mood of the film is done superbly. The characters and strands of the stories are brough to life. No. made LARGER than life by skillful direction and an undeniably strong screenplay as every scene had to be approved by Frank Miller himself!. Highly recommended, especially with all the lights off and the curtains drawn.

One for the boys I would say. I watched bits but found it too intense and a bit weird. My husband really enjoyed it, as have various friends.

I found some scenes a bit brutal, not one to watch with your inlaws or impressionable teenagers!