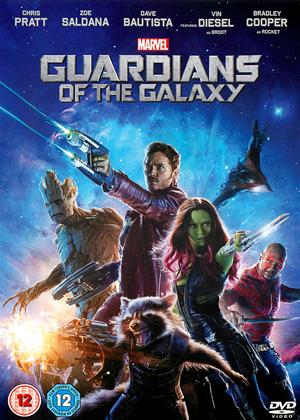 Reviews (5) of Guardians of the Galaxy

You'll either love it or hate it. I hated it :( - Guardians of the Galaxy review by RP

It's the great summer blockbuster of 2014, it's had some excellent reviews and most people seem to like it. So I was looking forward to it and sat down with two other 'big boys' with refreshments to hand. It was *DIRE*.

I grew up in the 1950s and 60s when US comics were expensive and (relatively) hard to come by, when what was on offer here in the UK was Beano, Dandy, Topper, Hotspur, Eagle etc. The US comics were full of colour, full of amazing characters having amazing adventures. I loved 'em and consumed them avidly.

The only positive thing I can say is that Vin Diesel was well cast, for a 'wooden' actor - as a tree, whose lines consisted almost entirely of "I am Groot". Great acting, Vin.

Given the number of people who seem to have enjoyed it I'm probably well in the minority, so it's perhaps one of those films you either love or hate. I'm definitely in the latter camp, so I'll give it an over-generous 1/5 stars.

good action - Guardians of the Galaxy review by gazmb

I enjoyed this film , yes they save the Galaxy the clue is in the title. I thought the charactures were great, Great action and adventure through out the film, the special effects were great.

Good film for what it is. - Guardians of the Galaxy review by AF

If you want to have a laugh with the older kids (around 12) then watch this.

If you have the sound system then the 7.1 soundtrack is superb. This film has great visuals, great 70s music all mixed with in with some funny gags. Don't expect a miracle just expect to be entertained. Nothing groundbreaking here just light entertainment.

Just like marmite, you'll love it or hate it (I didn't love it!) - Guardians of the Galaxy review by CP Customer

Although loud and colourful and a great soundtrack, the acting was fairly poor, the storyline boring and I've wasted 2 hours of my life (my 12-years old loved it so definitely aimed at kids.

The best Marvel movie? - Guardians of the Galaxy review by MB

Possibly the best yet in the Marvel Universe, a completely beguiling, acid-drenched, technicolour, psychedelic freak-out space opera full of imagination, wonder, excitement, adventure and not a little hilarious comedy styling. 10/10!

Guardians of the Galaxy review by George Hooper - Cinema Paradiso

While Marvel have been increasingly inventive with their films over the last few years with their previous film Captain America: The Winter Soldier managing to be part superhero movie, part political conspiracy while never missing a beat when it comes to out there action and adventure. Guardians while expanding the vast universe Marvel has created also fails to take that many risks, it holds to the conventions of many of Marvel’s initial outings while never quite establishing its characters beyond the archetypes they had in their head initially.

Guardians of the Galaxy follows Peter Quill (Chris Pratt) or as he likes to call himself, Star Lord as he steals a powerful orb and finds himself being chased by murderer Ronan (Lee Pace) across the galaxy. He is joined by assassin Gamorra (Zoe Saldana), Rocket Racoon (Bradley Cooper), living tree Groot (Vin Diesel) and revenge seeking Drax the Destroyer (Dave Bautista) as they try to keep the orb away from Drax and make a little bit of money for it as they go.

The problem with Marvel and Guardians isn’t its visuals (they are breathtaking), it isn’t the acting (although Saldana is still horrendous as ever) but its the failure to see that the film they have created, no matter how out there the worlds they have built for it are, is strictly following a formula designed for the sequels to follow it and not the film it is trying to present. The film aims down the road, never considering the film that is being crafted in the here and now. Jokes fall flat because they are poorly thought out, the action is entertaining but has been done before and overall the film feels too messy, even if that is one of the defining characteristics of this little group of misfits.

All in all Guardians is a fun little picture with some excellent fight scenes as well as some great comic timing from, wait for it, Bautista, but it misses the point of Guardians somewhat which is the strange factor and while a talking racoon does make up for it in some parts there is nothing in this film that feels especially out there.