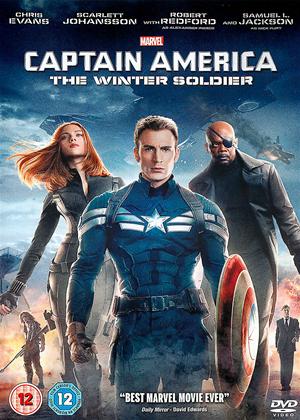 Rent other films like Captain America: The Winter Soldier

Good Film with superb action throughout. Loved Redford's cameo appearance which added real star quality. Obvious from the ending that a sequel is on the way!

Excellent action and a good plot but just how much punishment can Captain America take? ;-) They seem to have upped his endurance to Superman levels in this film. Also you know they've stretched realism a bit too far when you have to say to your 10yr old son "I know but it's a Hollywood movie dude" ;-)

Yes, it's another blockbuster comic-book all-action superhero movie from Marvel Studios. Yes, it owes the majority of its appeal to superb CG FX. Yes, the acting is a little wooden and the script sometimes clunky - but hey, that's not what it's about. And yes, I enjoyed it!

Frankly, some of these recent Marvel Studios movies have left me cold - I really didn't like the 'Thor' or 'Avengers' films, nor 'Guardians of the Galaxy', popular though they all are. But although this one is seriously over the top, it makes up for a typically silly comic-book storyline (thawed out super-enhanced WWII veteran rescues SHIELD from infiltrating ex-Nazi conspirator baddies Hydra) with the usual running, jumping, fist-fighting, shooting, explosions, car chases, hanging-on-by-fingertips shenanigans that we have come to expect - and it is rather well done, even if it is a bit long at over 2 hours.

But all that is a bit too analytical. Sit back and revel in the crash-bang-wallop effects and general mayhem. It's great fun, even if it is a bit earnest in parts, so I'll give it a generous 4/5 stars.

Great Film, but not the best in 3D - Captain America: The Winter Soldier review by John M from Romsey

Very enjoyable, with good story and acting. Only downside was that this seemed to be made for 2D and then converted to 3D, which we have found before, is not as good as a film made for 3D in the first place e.g. 'Avatar').

You're either in the market for juvenile Marvel tosh with paper-thin plotting and characterisation or you're not. This film easily matches the dizzying heights of Thor and Avengers movies as our hero uses his shield as a Frisbee to kill the baddies. Lots of cgi and cliched superfast editing of fights to mask their lack of skill and artistry. The default generic Mickey Mouse muzak. There may be a plot, but who cares? Everything is throwaway and shallow for an audience of ADHD thumb-twiddling zombie-heads. Reminiscent of Saturday-morning Flash Gordon serials, though they were intellectual masterpieces by comparison. Worst of all, the ending sets up the threat of another sequel. Feel sorry, very sorry for chief baddie Robert Redford that it's come to this. One star for production values.

Superhero films are a genre that’s never appealed to me that much. However, I was told to watch this by a friend who is a superhero buff. My views on superhero movies haven’t changed but this was an enjoyable film with great action and a storyline that didn’t ultimately need you to know the backgrounds of the characters or to have watched previous films. A good watchable action movie; nothing more, nothing less.

The latest addition to the Marvel Cinematic Universe franchise is the epic and extremely explosive Captain America: the Winter Solider; the follow up story to the First Avenger which set up our hero Steve Rogers (Chris Evans) as the genetically engineered super solider brought out of a cryogenic sleep he had been in since 1945.

This time around Rogers is facing a mixture of both modern devils and old reliable evils in the form of the infiltration of the superhero secret agency S.H.E.I.L.D and an attempt on the life of the agency’s top dog, Director Nick Fury (Samuel L. Jackson). With the beautiful, but rather wooden, Scarlett Johansson by his side the Cap finds himself facing a few familiar faces and fighting old friends.

There isn’t a great deal else that needs to be said about the plot, there’s a bit of mystery but it doesn’t take a rocket scientist to work it out before the film actually gets round the big reveal, and the writers have done their best to throw in a bit of romantic chemistry between Johansson’s Natasha Romanov and Rogers, but lets be honest what these films are really all about are the visuals. Whether they’re the sight of the Captain himself, all suited up and performing super-human feats or if it’s an explosion big enough to take out a small city, the CGI in this latest MCU picture is much like those of its predecessors, flawless.

It takes some real artistry and dedication to create visuals like those offered up in Captain America: the Winter Solider, and unfortunately for this particular film the plot would fall a little short without them. Don’t get me wrong, I wasn’t bored once, and as a bit of a fan and closet geek I couldn’t help but squirm with excitement at the sight of Bucky, the aforementioned Winter Solider, and the requisite sneak peeks offered in the film’s two post credit scenes, I just suspect that when they first imaged the film the bigwigs up at Marvel Studios didn’t see it as a stepping stone movie, but as something with a bit more clout.

I think that what this film lacked most was a little bit more soul, all the potential for some genuine characterization is there, and we know the writers have it in ‘em because they successfully pulled it off with Iron Man and in the previous Captain America feature; but here there’s a little bit too much emphasis on how they’re gonna beat the baddies than who they, and their villainous counterparts, are.

As always however, the film was a treat for the fans and that’s why I have to rate it so highly, in spite of my own occasional issues, the film has definitely whet my appetite for the next Avengers piece and I’m really intrigued to see how they follow the thread of this story line into the film’s spin off TV series Agents of SHEILD; and with brief appearances from How I Met Your Mother’s Cobie Smoulders and a wonderfully laboured attempt at acting from the man behind it all, Stan Lee, Captain America: the Winter Solider is, undoubtedly, another Marvel success.