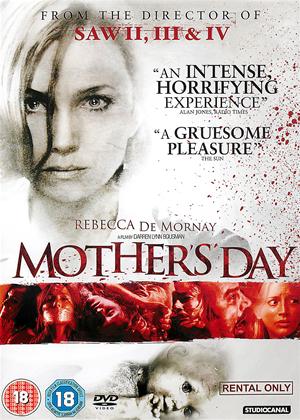 Unpleasant but not frightening! - Mother's Day review by PV

This film is worth 2 stars only: it'll pass an evening, but no more. It's certainly not scary or in any way frightening. Unpleasant, yes - with lots of guns and shooting. As for the theme - well, it's motherhood. But the character issues feel tacked on. I simply did not believe in these characters, or the story and the way the characters behave in it. The 'ma' character is WAY too young too - an older actress would have been better. There are also a few plot holes and some storylines that are just dropped - (Queenie...) - which is annoying. I found this dragged terribly too - I felt myself yawning and looking at my watch: this should have been 20 minutes shorter. BUT all in all, not dreadful, but not good. It'll pass a couple of hours...

What happens when three criminal brothers running from the law after a botched robbery suddenly decides to return home, only to find their mother is not there? What do the brothers do when they see the new homeowners and there’s even an ongoing party at the basement? Where do they run? Where’s their mom? Is hell about to break loose? This is ‘Mother’s Day’, a horror thriller flick remake from the a 1980 Troma production of the same name.

Although ‘Mother’s Day’ is a remake, director Darren Lynn Bousman and screenwriter Scott Milam made a conscious decision to retain the original skeleton of the story, yet put their own personal stamps on their version. In fact, you may even say that ‘Mother’s Day’ is a totally different picture altogether.

The titular Mother of the movie is veteran actress Rebecca De Mornay, who last made us think twice on getting nannies in the psychological thriller ‘The Hand That Rocks the Cradle’. This time, De Mornay as Natalie is more schizophrenic than ever, making sure to taunt, fawn, and torture her own sons and their victims from one instant to the next. Such evil could not have been all imbibed by the matriarch, the one person who’s supposed to care and nurture. The gore and violence here are disturbing, effectively translating to screen yet again one of the scariest things to happen to you, is a simple home invasion.

To back De Mornay up are her wayward sons: Ike, Addley, and Johnny, plus a sister Lydia. And just to make sure that you know they’re a family of doom and gloom, their last name is Koffin.

‘Mother’s Day’ seems to say that party equals trouble. Is the movie actually a public service announcement to behave ourselves or else? If so, okay.