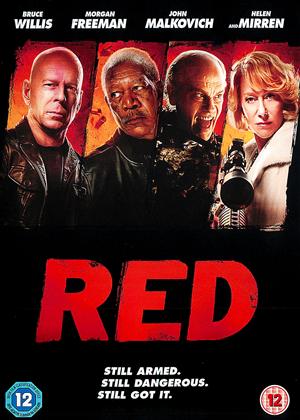 Completely within the Bruce Willis genre of feelgood escapist silliness. Having Mirren, Malkovich and Freeman to give an air of gravitas makes the silliness even more humorous. Lots of dark silliness (Mirran pouring acid onto a recently killed victim to dissolve him while she talks on the phone, noxious gases rising from the bath as she talks). If you like Die Hard, this is fantastic.

Red (‘Retired Extremely Dangerous’) revolves around a former CIA agent Frank Moses who discovers that his life is at risk because of an unknown assailant. In an effort to increase his defenses and presumably, save his life, he contacts and reassembles former team members to uncover the truth behind his faceless attacker.

With a supporting cast powerhouse, Red offers a mouthful of cinematic acting from Hollywood greats. Although in his early fifties, Bruce Willis is superb as a gun-hoisting action hero in a mission to unearth government conspiracies. The refreshing part of the cast is Helen Mirren (The Queen) as Victoria, who we seldom see as someone who would poke a gun and shoot with reckless abandon, giving the film breath of fresh air. Weed’s Mary-Louise Parker and cameo appearance of Morgan Freeman don’t disappoint either.

The plot, however, needs a little reinventing. It has the all too familiar conspiracies in government agencies. While the action scenes may serve as a little excitement, the plot is predictable and it feels like it was used in so many other films.

Overall, the movie is neither good nor bad. It is packed with adrenaline-pumping scenes that leave action-comedy lovers at the edge of their seats. The intricacies of espionage and good dose of humour makes it worthwhile yet forgettable. Whether it is highly enjoyable or not, really depends on the audiences’ taste.