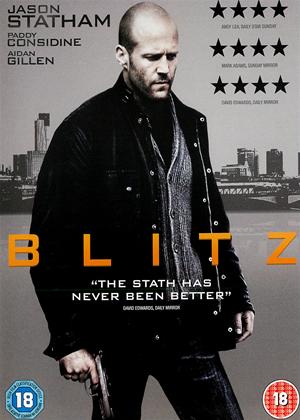 ason Statham is not one of my favourite actors. He seems to be typecast into hard-man, mockney gangster, tough-man roles, with not much scope to display acting ability. That is, if he has any - frankly, it's not been much in evidence in his so-called 'action' films. And there's not a lot of difference here, although there is some pretence that he's Irish - but his acting is much better. And there's no special effects.

On the other hand, Paddy Considine is one of my favourite actors. He has excellent acting skills, proved himself adept at a range of characters and accents and has appeared alongside big name stars (Matt Damon, Russell Crowe) without being outclassed. He has also written and directed his own films, winning a couple of BAFTAs in the process. And he even has his own band ('Riding The Low' - they're not bad - check out their 2009 EP and 2013 album).

'Blitz' is based on a novel by Ken Bruen. Perhaps unfortunately it is the 4th in Bruen's Tom Brant series, which leads to a few loose ends as the backstory of the characters is never explained. But that's a minor point...

'Blitz' opens with gritty, tough DS Tom Brant (Jason Statham) using a hurley (=Irish hockey stick) to mete out (humorous?) punishment to local foul-mouthed, car stealing youths. Having established his Irish credentials, the plot progresses as a couple of local police are killed by someone calling himself 'The Blitz'. Along comes Acting DI Porter Nash (Paddy Considine) to take over the investigation. Nash is openly gay, which leads to some banter with the unreconstructed Brant; anyway, the two seem to get on just fine and jointly break not a few rules and heads as they identify the killer and punish him fatally. Err, that's it.

It's a fairly straightforward Brit cop/crime film with the usual ignoring of police procedure and familiar grim, depressing urban setting - but apart from the rather peculiar labelling of the police as 'London' rather Metropolitan Police, there is none of the River Thames / Big Ben / red double-decker bus scene setting that seems to be required fodder for the American market. So it must be for the UK market, then? If so, it's not been too successful...

Having said that, I quite enjoyed it - it's better than I expected. Yes, it's tough and violent with a fair quotient of f-ing and blinding, but it did allow Statham to take the central role without the martial art / Hollywood gloss that perhaps he's had too much of.

I'll give it 4/5 stars, although that does seem a little generous. If you like the genre, give it a try.

Based on the novel by Ken Bruen of the same name, ‘Blitz’ stars oozing-with-testosterone action star Jason Statham as Detective Sergeant Tom Brant who works the streets of gritty South East London. His boss is played by Paddy Considine as Sergeant Porter Nash, a brilliant and tough-as-nails gay detective that gets the job done. When a serial killer who calls himself The Blitz terrorizes PCs and kills them senselessly, DS Tom Brant and Sgt Porter Nash have to work together so the cop-killer won’t murder one of their own again.

Directed by Elliott Lester and penned by novelist Ken Bruen and Nathan Parker, ‘Blitz’ is a modern-day detective noir comprised of interesting characters and hard-hitting action. What did you expect – it stars Jason Statham, a man who uses a hockey stick to take down bad guys and is certainly not to be messed with. Even if Statham’s Tom Brant is un-PC, a brawler, and heavy on English machismo, it is undeniable that he and veteran actor Paddy Considine as his gay detective boss have a natural on-screen chemistry. You sensed the sexy in Statham and Considine’s interactions? It’s meant to be there.

The action sequences in ‘Blitz’ are hyper and feverish with more style and substance than most action-thrillers produced these days. There’s an old-fashioned quality to it – coppers love to booze, journalists are nosey buggers, and everybody’s got issues – and they’re all up in each other’s faces while The Blitz is on a killing spree. London is not the haughty place of culture with civilized citizens but a grimy city with a not-so-shy underbelly and its criminals run amok. Jason Statham and company have their hands full and they’re itching to clock someone in the face.

You can never go wrong with ‘The Blitz’; actually, this is the grittiest role Statham has to date – and he’s on the right side of the law! Usually, he’s part of the criminal society so it’s nice to see him as a crime fighter for a change. Of course, it has his action stamp – people will get hurt, that’s guaranteed.