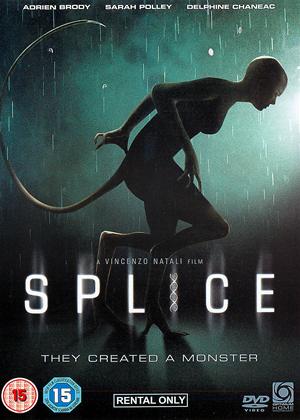 Synopsis:
Clive and Elsa are the best scientists in their field. Splicing together the genes of several animals they have managed to bring into existence a new kind of creature, the protein of which could be highly profitable. But experimenting for a large corporate firm doesn't satisfy their scientific curiosity. After secretly adding human DNA into their formula Clive and Elsa soon realise they may have made a mistake; a big mistake. A mistake that seems to be ageing, growing and transforming at an incredible rate. An uncontrollable mistake that's about to break loose and rip their world apart into tiny pieces.
Actors:
Adrien Brody, Sarah Polley, Delphine Chanéac, Brandon McGibbon, Simona Maicanescu, David Hewlett, Abigail Chu, Doug Hicton
Directors:
Vincenzo Natali
Writers:
Vincenzo Natali, Antoinette Terry Bryant
Studio:
Optimum
Genres:
Horror, Sci-Fi & Fantasy, Thrillers
Countries:
Canada

The plot held a lot of promise with 2 scientists creating a creature made up of a mish-mash of DNA. What have they made? Can they control it? What are the social consequences? The presence of Adrien Brody heightened my expectations somewhat (he being 'The Pianist').

I have enjoyed previous films of similar ilk: the 'Alien' series, 'Gattaca' and "Species". However, I was very disappointed. Initially I was quite excited to see a portrayal of geeky scientists (true to my experience), but then found myself disappointed and slightly cringing at obvious flaws, e.g. the creature they have created had originally 3 fingers and later develops 5. Also, what happened to the nasal spikes (seen in the child-monster but not in the adult).

The storyline is wobbly with the creation of a miracle protein which only takes a few hours to make (hmmm!). And there being a handy ovum ready for insemination with the hybrid DNA. The film is also rather sexist, associating a male creature with aggression and a female creature with being passive and wanting to look pretty. Hmmmm.

It was sad to see a film commencing with a scientific edge descending into a mishmash of unrealistic predictability. Fire your agent Mr Brody.

When performing in vitro fertilisation it is hammy to say the least when a computor pop up states the outcome and further pop ups update onlookers to the progress. Maybe CSI is to blame for dramatising the science lab to such an extent as to lead us to expect instant and exciting experiments. It doesn't work. It can work, I think Sahara combines science with drama well. The horror doesn't really go with the academic stuff.

On a positive note there were ethical issues that were explored regarding gene technology and commercialism. How did they do the creature? Must have been a mixture of techniques. That was pretty convincing.

Splice is a grotesque live feature directed by Vincenzo Natali, and starring Adrien Brody, Sarah Polley, and Delphine Chanéac in the main roles. The film is about a genetically manufactured/engineered creature which becomes more than meets the eye and, as these things go, turns against its creators in a scenario that just can’t end well for everyone involved – especially the people in the white coats. All of this sounds good on paper, but the pacing of the film and editing both feel somewhat off, while the story is incoherent at best and muddled at its worst; that isn’t to say that Splice is a bad film, but rather it’s a film that I don’t think I’m quite getting.

The film starts by showcasing the brilliance of two genetic scientists, Clive and Elsa, as they try to “produce” an intelligent biological creature in order to cure already existing diseases in the world (a recipe for sci-fi disaster, I know). Their first attempts are fruitless, however they alter manage to “splice” the DNA of several other animals and produce a living, breathing hybrid for, as they refer to, “research purposes”. And this is where the sci-fi part ends and the bizarre part of the film slowly creeps its way into place. Note: by this time in the film, the creature is female, so keep that in mind.

Dren (the hybrid’s name) has a very strong appetite and is actively growing to the amazement of both Elsa and Clive. But, since their experiment has been deemed too dangerous (and costly) to proceed, all funding has been cut and further activity ceased by their employers. However, to the stubbornness of the two, they decide to relocate Dren to a safe place since they can’t keep it in the lab anymore. Some of the colleagues become suspicious, but no one dares to venture further into these two’s twisted experiments, and so they get successfully get away. So far, so good.

Then the screenplay decides that Clive should have sex with Dren and this is where all sci-fi logic transmutes into a bizarre fest of changing genders, newborn hybrids, bestiality and betrayals (since Clive is also Elsa’s boyfriend, albeit in a rocky relationship), and an ultimate incoherence of story and plot. You heard that right, Clive has sex with Dren, but then Dren changes its gender and becomes a male. Granted, this is after it has coital relationship with Clive, but still, what the heck Vincenzo? And it’s not like this is important to the plot (i.e. happens organically), but it feels rather forced, illogical, and downright bizarre. Then again, Italian horror has perhaps always been this way?

Ultimately, Splice is the most originally bizarre piece of cinema that doesn’t involve gore that you can see – so hurry and do that before it becomes the film becomes a cult classic.