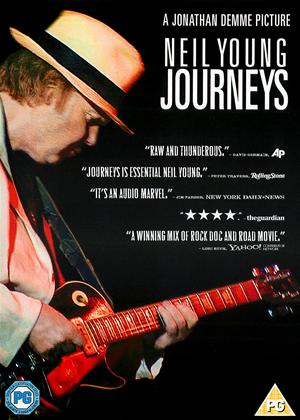 Synopsis:
In May Of 2011, Neil Young drove a 1956 Crown Victoria from his idyllic hometown of Omemee, Ontario to downtown Toronto's iconic Massey Hall where he intimately performed the last two nights of his solo world tour. Along the drive, Young recounted insightful and introspective stories from his youth to filmmaker Jonathan Demme. Demme, a long-time fan and collaborator, captured these tales of Young's childhood and masterfully weaved them together with his mesmerising music including live performances from the 2010 album Le Noise and powerful renditions of classics including "Ohio", "Hey Hey, My My", "I Believe In You" and previously unreleased songs "Leia" and "You Never Call".
Through the tunes and the tales, Demme portrays a personal, retrospective look into the heart and soul of the artist.
Actors:
Neil Young
Directors:
Jonathan Demme
Producers:
Jonathan Demme, Elliot Rabinowitz
Studio:
Sony
Genres:
Documentary, Music & Musicals
Countries:
Canada

Singer/song writer Neil Young returns to Ontario the Canadian province he grew up in to revisit some of his most memorable places and perform live at Toronto’s vintage concert hall, Massey Hall.

Following on from Heart of Gold and Trunk Show, Journeys is essentially a concert movie where fans get to watch the Rocking in the Free World singer not only perform but discuss some personal thoughts and bring light to some of his work.

Director, Jonathan Demme, is a well known name amongst music documentary aficionado’s including Young’s own Heart of Gold, although having said this Demme is also known as the director of 1991’s Oscar winner Silence of the Lambs. If that does not give you enough of an idea of what to expect from Journeys then I will simply say that fans of Young’s music will find this an interesting and insightful film that is sure to leave them shouting “Hey, Hey, My, My”.