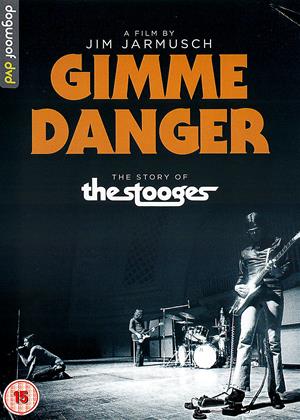 Sign up
Snoopy and Charlie Brown: The Peanuts Movie

A well directed bio with interviews of all (then) surviving members and some creative touches. Iggy is a great interviewee and often hilarious. My favourite moment concerns Rod Stewart and Ronnie Wood!!! You don't have to be a devoted fan to enjoy this.

Gimme Danger helmed by Jim Jarmusch is an extensive look at former rock band The Stooges during their upswing back in the day and ultimate downfall in the 21-th century. Overall, it’s a riveting depiction of how the band came to be, with all their accompanying swings and valleys, giving Iggy Pop the biggest share of screen time, which he gladly uses to recollect his memory of everything about the band, and not himself (a fair approach of the ultimate rock star). So, Gimme Danger – while not quite the quintessential, perennial piece of documentary cinema about music – is nevertheless fascinating just enough to hold your attention till the very end.

Back in 1973, at the sole inception of The Stooges, we set our eyes upon the then 24-year old Iggy and his affinities for rock n’ roll that lead him nowhere in particular (in the beginning at least). Then, as Steve MacKay and the other members stipulate their comments on how bad their last try was – they call it a day and go back to live in the most unsanitary of conditions. Iggy hops back in his parents’ trailer because hey: love toward music alone cannot pay your bills – let alone allow for something larger in exchange.

But they don’t give up on their hopes and dreams.

Meanwhile, Iggy grows weary of looking at people’s behinds (granted he plays the drums first) and ‘evolves’ to lead the group at the foremost front. In other words, his fame starts way before he was even conscious to even think about it as his status changes to frontman and leader of the group.

In continuation, Jarmusch undergoes a procedure to convince us, the unsuspecting audience that indeed: The Stooges were the greatest rock n’ roll band in all of Earth’s history till now. This is where Jim loses (intentionally) his charm as a filmmaker and starts relying on conventional music/documentary techniques to bring us an all-natural look at what those guys were doing back in their day of fame and glory.

And he bodes well playing with the formula to say the least.

The film’s structure relies upon (mostly) countless interviews, historical footage of the band rocking the stage and Iggy’s reminiscence of his days long past gone. This is where the film falters a bit, but ultimately picks back up when all is said and done. Quote fascinating for a documentary of that caliber really.

At the end, Gimme Danger probably won’t break many conventions, or invent new ones for that matter, since everything is packed in ways already used and re-used countless times before – now stamped by Jim Jarmusch the director himself and thrown at us, the audience, to graze upon its surface like vultures against tightly-set guitar wires.