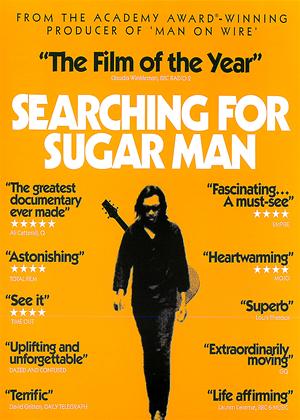 Synopsis:
In the late '60s, a musician was discovered in a Detroit bar by two celebrated producers who were struck by his soulful melodies and prophetic lyrics. They recorded an album that they believed was going to secure his reputation as one of the greatest recording artists of his generation. Despite overwhelming critical acclaim, the album bombed and the singer disappeared into obscurity amid rumours of a gruesome on-stage suicide. But a bootleg recording found its way into apartheid South Africa and, over the next two decades, it became a phenomenon. Feature follows two South African fans who set out to find out what really happened to their hero.
Their investigation led them to a story more extraordinary than any of the existing myths about the artist known as Rodriguez. This is a film about hope, inspiration and the resonating power of music.
Actors:
Rodriguez, Stephen 'Sugar' Segerman, Dennis Coffey, Mike Theodore, Dan Dimaggio, Jerome Ferretti, Steve Rowland, Willem Möller, Craig Bartholomew Strydom, Ilse Assmann, Steve M. Harris, Robbie Mann, Clarence Avant, Eva Rodriguez, Regan Rodriguez, Sandra Rodriguez-Kennedy, Rick Emmerson, Rian Malan, Malik Bendjelloul
Directors:
Malik Bendjelloul
Producers:
Simon Chinn, Malik Bendjelloul
Writers:
Malik Bendjelloul, Stephen 'Sugar' Segerman
Others:
Malik Bendjelloul
Studio:
StudioCanal
Genres:
Documentary, Music & Musicals
Awards:

Reviews (7) of Searching for Sugar Man

I found this so compelling that I bought the album. The film is strangely unfocussed on the music much more on the myth and legend of a lesser known folk singer. It is a genre between biography, documentary and detective. The songs are only played in short segments. I don't know if this is to maintain a mystery, avoid paying royalties or because as I discovered, they are very repetitive, almost hypnotically monotone and initially tedious. I urge you to keep with it because it is very simple music but the mood can be very melancholy.

So so good! - Searching for Sugar Man review by BS

It just doesn't seem like a real story. The structuring is excellent. It grips and holds and takes you along. The end will bring you to your knees in a moving yet charming way. It is a shame that other reviewers have revealed the plot, because I went into it blind and couldn't believe it was real. Do it.

ASTONISHING AND ABSORBING - Searching for Sugar Man review by JF

I was hooked immediately. And it wasn't just the astonishing story of the "forgotten" musician and the lengthy search to find him. I was also taken aback at some of the details of life in South Africa for the white population of the time. In the UK we knew about the trials and tribulations of the black population, but little of how the average white S. African was affected by the anti-apartheid embargoes. The young population were apparently cut off from the mainstream culture of the rest of the western world ... As the white South African 'Sugarman' explained, it was a very conservative country, and Rodriguez' lyrics shocked many.

The huge reaction, the emotion and the warmth of the crowds was a revelation, and not just for his first gig

I now have both the DVD and a CD, so obviously the film has made me a fan.

I loved this film. I rarely watch movie documentaries. But this and the recent British documentary FRANK are genuinely moving.

Very sad of course, that someone should not get success and then have to go back to their old life of little money and hard graft BUT that happens to MOST PEOPLE who want to make it in the music business (or film business or as an author!). Only a select few make it via sheer luck and contacts; right time right place.

This guy didn't help himself when playing songs at gigs in a veil of smoke and his back to the audience (as I would like to do to!). I disagree with the music boss here who makes claims of racism, that he failed to make it because his name sounded Hispanic (Rodriguez). It's not as though all pop and rock stars in the late 60s and early 70s were wasp white Americans, is it? Plenty of racial diversity.

No, I think the reason Rodriguez failed to make it is that his songs were very derivative and simply not good enough. Some nice ones though and I was yearning for him to finish that 3rd album now at age 70-ish. BUT most money now is in live shows, not CD/record sales as once was, so he should keep doing that. The guy is so stoical it's unreal. One wonders if he's been on the 'sugar'...lol

Weird that he made it in South Africa - but only white Afrikaans community, it seems. A fairytale come true really. Reminds me of others who get fame in certain world locations - the old 'Big in Japan' thing, where pop bands who do nothing in the UK or even US make it there. It happens, for weird and vague reasons.

Genuinely loved this film. Reminds me a bit of 2008 documentary about failed Canadian 80s rock band ANVIL - who were, yes, big in Japan but never made it anywhere else, so members do regular jobs. Or did, until reforming after the documentary and touring the world.

I very seldom cry at films, and even less so from happiness, but this story and the artist’s personality really cracked me! The man is the genuine article, a true poet, his music is simply excellent: sincere, haunting, moving, very, very special. Highly recommended.

Very interesting story of a singer/songwriter who never 'made it' in America. Once you have listened to the rhetoric of acquaintances, you can check out for yourself what a gifted and unassuming performer Sixto Rodriguez was. Not wishing to spoil the movie, I'll say no more apart from the fact that I am smitten and have ordered one of his albums!

A singer-songwriter's music career in America ends in failure and he goes on to live a humble, but still unusual life on the mean streets of Chicago... Half a world away in South Africa, his songs live a life of their own, touching many people, and become tangled up in the protest against apartheid.

That set up is pure Frank Capra! This is a wonderful, inspiring and moving documentary, which delivers a pay off of quite delicious sentimentality. A remarkable story.

Searching for Sugar Man is a movie heaped in unexpected-ness; there really is no other way to put it. This musical documentary begins as two South African music lovers; a record store owner and a rock journalist decide to find out the truth behind the disappearance of their idol, a Mexican-American musician whose music resonated so strongly with the oppressed people of South Africa during the Apatite that his songs became the war cries of a generation.

This unexpected music god, known only as Rodriguez, rocked South Africa after a single copy of one of his records was brought home as a gift by a girl for her boyfriend back in 1970, from there his music spread like wildfire. Yet, it seems, Rodriguez would never step foot upon the continent himself.

All this happens in the early 90’s, and the case (as followed by our rock and roll detectives) seems to wind constantly out into rumour and hearsay, until sometime in 1998 when the advent of the internet cracks the case wide open.

It is hard to discuss this movie without spoiling its outcome, I can say however that as the unexpected mystery of Rodriguez’s current whereabouts unfold we are treated to a wealth of other character interviews with those who knew him or heard his music almost thirty years ago. A patron of a slum bar in Detroit describes him as a drifter, whilst some of the men behind the biggest names in Motown lament over his lack of success State-side.

The unexpected popularity of Rodriguez can really only be translated to that of Bob Dylan in Western culture – and the music that makes up the soundtrack to this fabulous little documentary is surprisingly evocative of Dylan and left me with goose bumps.

In its short runtime Searching for Sugar Man introduces a wholly unexpected but nonetheless charming and fulfilling drama and mystery that literally blew me away. This is an absolute must see for anyone with an interest in music or political history and an unexpected treasure for everyone else.