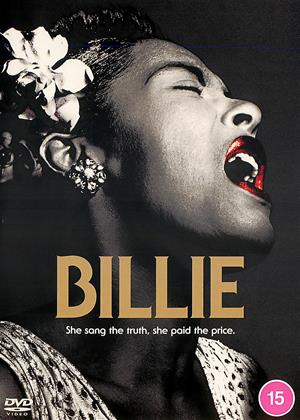 Synopsis:
What if the most important story in your life was not your own? Billie Holiday, one of the greatest voices of all time, was always considered controversial: a black artist who was exploited; a volatile drug addict who achieved great heights; and a woman who stood firm while performing the seminal protest song Strange Fruit, making her an enemy of the state.
Bringing Billie Holiday to life in colour for the first time and drawing on nearly 200 hours of never-before-heard taped interviews with musicians like Count Basie and Tony Bennett, as well as friends, lovers, pimps and the FBI agents who were sent to hunt her down, 'Billie' is the definitive story of a jazz icon and of the journalist who died trying to tell it.
Actors:
Tony Bennett, Billie Holiday, Count Basie, Charles Mingus
Directors:
James Erskine
Producers:
Barry Clark-Ewers
Writers:
James Erskine
Studio:
Altitude Film Distibution
Genres:
British Films, Documentary, Music & Musicals, New Releases, Special Interest
Countries:
UK

I was interested to find out more about Billie Holiday and found this to be fairly interesting. Will this go down as a classic possibly not but anyone interested in a musical icon and music history will enjoy this.

I was interested to find out more about Billie Holiday and found this to be fairly interesting. Will this go down as a classic possibly not but anyone interested in a musical icon and music history will enjoy this.

This film is a documentary which I don't think was obvious from the description and is of very poor quality. It focuses largely on her personal life and the views of her biographerand others which were often critical and dispassionate - one person called her a psychopath, another a masochist!

Added to which the sound quality is very poor and the subtitles difficult to read.

It was good to see glimpses of her performing but I struggled to watch it.

Mixed Bag but well worth a look - Billie review by PD

This one begins as it means to go on - by talking, not of Billie Holiday, but of Linda Lipnack Kuehl, a journalist who in 1971 embarked on a biography of the Billie and died in 1978 - suicide, according to the police, murder, according to others. So we have two films in one based on two different people, and whilst it's an intriguing premise, to my mind the execution is at best clumsy and at worst significantly detracts from the lives of both people.

Kuehl amassed a formidable research archive, including tape recordings of interviews with Holiday’s collaborators, friends, lovers etc. Some of her work was used in subsequent published biographies, but the film's director, James Erskine, acquired the rights to her entire collection, and “Billie” is the result. It's a fairly sympathetic review of Billie's life, packed with incident, much of it pretty disturbing, but the film plausibly insists that she also lived her 'high life' with a level of proud ostentation, and the suggestion of a masochistic self-destructive instinct is particularly convincing. And while the parallel lives are rather awkwardly done, Eskine's handling of Keuhl’s interviews are pretty good - what’s said on the tapes often kicks us in the gut. Some of her white collaborators speak of Holiday condescendingly, whilst the legendary drummer Jo Jones seethes with an anger at Holiday’s exploiters you can still feel decades after the fact. But she isn't, crucially, portrayed as 'victim', which I'm sure she would have approved of.

Another weakness is that the film gives short shrift to subject’s artistry; there's just nowhere near enough of the music. There's some great moments - particularly the soul-piercing 'Strange Fruit' - but unfortunately the (admittedly terribly difficult) need to match the persona along with the art simply doesn't happen here. That all said, it's a great watch on the whole, and both fans and onlookers alike will find much to think about. Well worth a look.