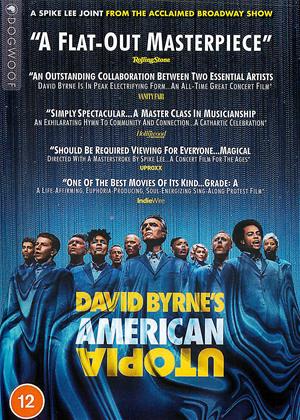 Synopsis:
'Do we get stupider as we grow up?' In his wildly popular Broadway show 'American Utopia', David Byrne reflects on human connections, life and how on earth we work through it. He joins the dots with his music and it all starts making sense. Spike Lee here transforms the production into immersive, dynamic cinema that radiates with astounding performances, inventive contemporary dance and political urgency. 'American Utopia' flows like an iridescent dream vision. Work by James Baldwin, Janelle Monáe and Kurt Schwitters is highlighted among exhilarating renditions of Byrne's solo work, as well as Talking Heads classics.
According to the multi-hyphenate, we love looking at humans more than anything else. Anti-fascist and anti-racist, Byrne illuminates our responsibility to care for one another as he and his co-performers burn down the house.
Actors:
David Byrne, Jacqueline Acevedo, Gustavo Di Dalva, Daniel Freedman, Chris Giarmo, Timothy Keiper, Tendayi Kuumba, Karl Mansfield, Mauro Refosco, Stephane San Juan, Angie Swan, Bobby Wooten Iii
Directors:
Spike Lee
Producers:
David Byrne, Spike Lee
Writers:
David Byrne
Aka:
American Utopia
Studio:
Dogwoof
Genres:
Documentary, Music & Musicals, New Releases, Performing Arts, Special Interest

Sign up
When the Levees Broke: A Requiem in Four Acts

Directed by Spike Lee, American Utopia is unlike any concert film I’ve ever seen. David Byrne doesn’t just show up to compose some of his most classic and notable of songs (though he does offer refreshing rendition). He poses big ideas within his sets, opening the concert off with a talk about the human brain and just going off from there. His band, all dressed in gray suits and marching around barefoot, compose an astounding array of thought-provoking and surreal music, all the while dancing along in one of the most free-wheeling expressions of art I’ve seen in quite some time.

Byrne has a gift for tapping into both odd sensations and what may be going through our minds during these many performances. He’ll at one point explain how the idea of perceiving gibberish words that mean nothing can tap into something deep within ourselves based on the tone. Other times he’ll go right into his theories behind his music. He mentions one song in particular that seems to have a different sound when it is sung by someone different, despite the same lyrics, tone, and instruments. He admits he can’t quite figure out how it was retooled as such but doesn’t question it too much.

The minimal yet versatile set works rather well in that there’s little distraction from the band, relying only on a few walls and stark lighting to fill the space. The entire band is present for most sequences, composing the entire score through guitars, drums, keyboards, and more. With everything present, Byrne also indulges the thoughts that may pass through our heads during the concert. For example, who are these talented musicians and dancers who work in perfect unison? We get to know a bit about them and where they come from before going into the next musical number.

Then maybe Byrne will talk about something cerebral or nostalgic, always floating between what he knows and what the audience may want to discover. It creates a surprisingly open nature where even though Byrne is leading this concert it feels as though there’s a conversation with the audience. By that I mean the audience watching this film at home. The audience itself is addressed and interacts. At one point, Byrne talks about voter turnout and uses the crowd to represent those expressing voter rights. One audience member woos and Byrne reacts with a similar smile, encouraging a sense of joy in what is going on.

The whole experience is just a wonder for the eyes and ears, always drawing in with a canvas that aims for color and music that taps into something more. It’s far more than just a dazzling reprisal of Once in a Lifetime or Burning Down the House. Once more, yes, the Talking Heads fans will get that here, but there’s so much more to American Utopia, tapping into something powerful and enriching without ever seeming so simplistic in its aims at a mental connection. Few concert films ever build such a bridge and Spike Lee and David Byrne build one with great care, design, and love.