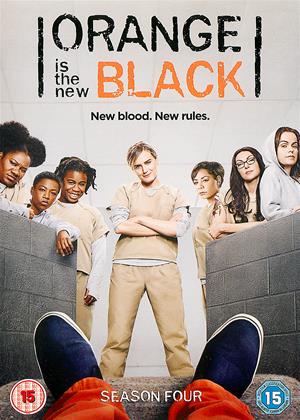 Rent other films like Orange Is the New Black: Series 4

Reviews of Orange Is the New Black: Series 4

Orange Is the New Black: Series 4 is a narrative masterpiece, featuring intertwined narrative threads that resolve with sheer brilliance, backed up with magnificent performances from everyone involved that ultimately surmounts to the best (yet) season so far. In fact, the fourth chapter treats considerably darker (but very much real) themes such as racism, prison violence, and excessive use of force – to name a few – in ways that seem more real than real life itself. To this extent, Orange Is the New Black: Series 4 succeeds on all imaginable levels period.

The series start with a notable friendship between Kukudio (Emily Althaus) and Suzanne Warren (played by Uzo Aduba), who forge alliances in light of the preceding events from season three. Further, the always eclectic Black Cindy (Adrienne C. Moore) is presented with a new dilemma: she has been converted to Judaism, but her new inmate is a Muslim. Meanwhile, Sophia (Laverne Cox) is still in solitary, while Alex (played by Laura Prepon) has quite the interesting story to tell after she meets a hit man in the greenhouse and lives to tell the story. Piper (Taylor Schilling) grows concerned while she addresses everyone involved (mostly a contingent of Latina women).

Orange Is the New Black: Series 4 is also funnier than usual, tethering on the verges of two idiosyncratic genres – mainly comedy and drama. This comes as a no surprise since OITNB had always reserved the right to be something more than just a straight-up drama, and it shows. The way OITNB handles mental illness, prison overcrowding, social sorting by ethnicity, and other sensitive issues, is equal times funny and more compelling than its previous iterations (seasons 1 – 3). Thusly, the first six episodes from Series: 4 are painstakingly funny – or more importantly – the funnier OITNB has ever been.

The fourth installment introduces flashbacks in order to expand upon some characters’ backstories (successfully, I might add). So, former warden Sam (Michael Harney) and Maria Ruiz (Jessica Pimentel) both receive the flashback treatment in this series, which adds more, complex layers on their characters and ultimately – their humanity as well.

Finally, it can be said without a doubt that Orange Is The New Black is a well-oiled narrative machine with a rarely seen story-churning capability which can (apparently) last three more seasons (as approved by Netflix). To this extent, let’s hope the screenwriters don’t ever run out of stories to tell and fates to end full stop.

Oh, and did I mention that the newest addition to the cast Brown is fun as all heck?