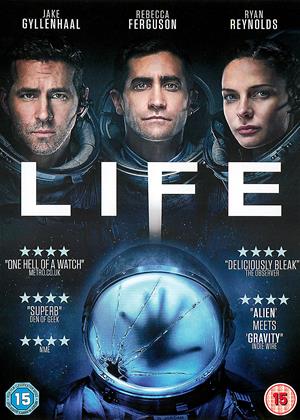 I'm not quite sure what the point was of making this film? It comes across as one of those first attempts at the big screen by a bunch of college students via a grant from the Film Foundation! The first ten minutes of the opening sequence, which one presumes was trying to create a strong ambience and feel for space, by showing us the sun rising over earth as the spaceship comes into view, is so rushed, jolty and badly edited, that it really does set a bad tone for the rest of the film! The storyline is essentially 'Alien', via 'The Thing', with lashings of '2001 A Space Odyssey' and countless 1950's Monster Movies thrown into the mix! So nothing new, different or really creative here, either in the script, direction, cinematography, special effects or acting, at least not for me as I've seen it all done before countless times and much better too! I found the direction too jagged, massive plot holes, the editing was poor and all in not a very original or creative film! In fact I get the plot was far too close to the original 'Alien' film for comfort. The ending was predictable and I was left with a sense of, why did I bother to watch this and what was the point?

14 out of 17 members found this review helpful.

I really wanted to like this film. Ok 1st the positives - first 20 mins are enjoyable and build suspense and set up very well. You can forgive the sheer level of stupidity from a biohazard point of view ( ie containment and exposure of crew) up to this point. Lovely cinematography and effects to be had.

Ok now the rapid come down, Boy is the script and dialogue bad. The actors do the best they can with it but it falls very rapidly into B horror movie area. Also the sheer level of stupidity is overwhelming. These are meant to be highly trained experts and they just behave as if they are stupid along with the space stations unbelievably bad design flaws ( ie lack of containment etc) Also space craft of this nature would have at least triple redundancy making the whole premise laughable unless the space station had been built by Trump.

So I can go with turn your brain off material but this takes itself way to seriously to allow that to happen. Design elements/action/script is borrowed from quite a few films - alien(s), Gravity, species, and a hold host of horror tropes are thrown in making this a very derivative film.

I feel sorry for the VFX team who obviously put a lot of time and effort in - shame the same isn't true about the script or direction. It so very quickly descends into bog standard horror material and not a lot making any real sense. It's more 'morons in space' or should be called 'death'.

Gravity raised the bar for what we expect from films set in space and Life does not disappoint. The whole film is set in a space station in zero gravity and the production design is dazzling. The long pre-titles sequence, in which the flowing camera follows the astronauts as they fly around the station, is mesmerising. The plot develops into an intense survival story when a minute Martian life form is taken on board, starts to grow and turns nasty. The pitch is Gravity meets Alien, but it’s better than Alien.

Alien’s main shock tactic was the old stand-by of having its characters wander through dark spaces while we wait for something to jump out at them. Life is more imaginative. Unlike in lesser sci-fi films, the plot is scientifically grounded and all the station crew are realistic and personable astronauts, which adds to the impact of the alien’s disregard for human life. Tension and shocks come from the nature of the beast itself, whose metabolism is apparently based on that of slime mould (see DVD extras). The zero-G camerawork, accomplished using wires, is fluid and captivating, spatially disorienting the viewer and adding to the other-worldliness of the events on screen.

Director Daniel Espinosa’s aim was to make a sci-fi creature feature that was both ‘plausible and terrifying’. He’s succeeded. Trailer notes: the trailer should be applauded for not giving too much away but is still best avoided.

This could easily have become an Alien wannabe but it has much more to offer, even if the story is a bit basic it cranks up the tension from the moment they bring the alien on board. They have also managed to give stock characters a bit more to work with and the effects are very good.

Shame about the rather obvious twilight zone ending but still well worth a watch if you are fed up with the overblown Alien sequels/prequels.

I completely disagree with the review by CS, he has no idea what he is talking about, a great film is about suspense and purpose and this film had both in abundance.

It stands on it's own in relation to any other film and is well acted and full of surprises from the first scene to the last. It will definitely bring in a sequel.

When a character says profoundly 'god I miss my dog' in a sci fi movie then you know you are in trouble. Badly written script and badly acted with characters you truly don't care about. Not a great combo! I think the dog might have been better!

Not very original at all. Although presumably it’s meant to be claustrophobic, it could have been opened out a bit more. Nobody to empathise with Or root for. Perfunctory but no more

Is there life in space - Life review by AR

I get why people don't like this film ...but ignore them and watch it. Great from start to Finnish if you have a home cinema crank the volume the sound is breath taking

An okay movie... just not a classic. - Life review by CJ

I'll keep this review as simple as I can, just like the movie.

Good points are: it does have some tense and scary moments, cinematography very good, actors good. What lets it down is the simplicity and similarity of the story. That and the total ineptitude of the space station crew to adequately prepare for, deal with or contain, a hostile alien life form. So, this is whole film condensed:

5. cute alien is actually a bloodthirsty hyper intelligent lifeform that is intent on killing every other living thing on sight and it's escaped into the ship

7. crew make inept attempts to catch alien before it gets back to earth and must destroy it all costs

8. alien gets larger, more intelligent and aggressive the more crew it eats