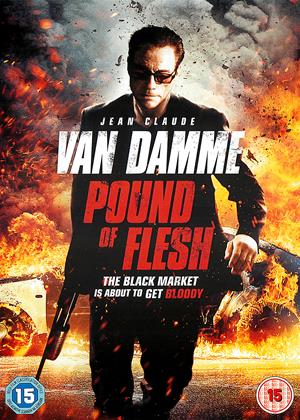 Reviews of Pound of Flesh

Pound of Flesh marks the third film Jean-Claude Van Damme has worked on with director Ernie Barbarash, proving that either Damme and Barbarash are very good friends or that Damme is pretty desperate to stay in the limelight. After Barbarash’s Assassination Games and Six Bullets, it’s clear that the director and star have no qualms about doing passive, low-rent action pictures. Pound of Flesh marks a stunning mark of progression for these films as it reaches so far down into the action cliche barrel you can hear them loudly scraping for every ounce of bland. It even goes straight for the old well of action B-movies by taking place in Manilla, Philippines.

The story plays out more like a Jean-Claude Van Damme fan fiction the way it paints his character as a super-tough saint. Damme plays Deacon, a former black ops agent (of course). He wakes up in a bathtub of ice with a missing kidney. Thus begins his revenge quest to retrieve his kidney that was taken from him by a prostitute and ends up with a criminal boss. But Deacon isn’t a completely soulless killer as he needs that kidney to donate to a dying girl in the hospital. It gives him a heart of gold and a decent goal for as sentimentally forced as it appears. There’s not much more to his character than those simple action movie traits without much of any personality. It’s mostly just Van Damme being Van Damme as he Van Dammes his way through hotels, brothels and underground fight clubs. No need to define a character when there is plenty of gun play and martial arts to focus on.

About halfway through the picture, I’m struggling to find something to distance Pound of Flesh from the myriad of forgettable action videos doomed to the deepest of direct-to-video bargain bins. For what it’s worth, which isn’t much, there is some decent lighting. The scene at the underground fight club where Van Damme corners the woman who wronged him amid a circle of gangsters is just a good looking scene. The bold lights playing with the shadows of Van Damme’s sunglasses-covered face half in the shadows is a surprisingly nice shot. And there’s at least some experimenting with the visual style as the flashbacks harken the color pallette of Sin City’s neo-noir play of grayscale and red.

But for being a Van Damme picture, it needs to count in the action department which is woefully presented. Why would you feature such a talent as Van Damme and hide his action skills behind far too many cuts and multiple shots? Rarely do you get a chance to see Damme’s moves without the film cutting away to a close-up or long shot after a few seconds. It makes you question just how in shape the actor is at his age. He’s certainly never given anything all that impressive to do here, mostly just snapping some necks and shooting some guns. The car ad Van Damme shot where he does the splits, balanced between two trucks, was far more entertaining than a single takedown or assault he performs in this film. How is it that a car commercial can do something more impressive and well-shot with the man in a few minutes as opposed to this feature film which can’t afford a scene with minimal cutting? Even the car chase feels cheap the way it relies on too many cuts, too many effects and actually stops the chase just before a crash happens. Don’t waste that car - you got to save it for the next film.

Pound of Flesh turns up much shorter than you’d expect for another cheap Van Damme picture to place on the forgettable list. Everything about the movie just screams cheap from the bland location to the overly forced plot elements of a routine action picture. The movie practically becomes a satire in the way it wedges so many forced emotions with incredibly poor writing. Damme’s character is built so far up by the end of the picture you half-expect him to rescue a puppy and a bus full of nuns by snapping the necks of 15 men while riding a speeding train. If this movie had the budget, it probably would have done such stunts without a second thought.