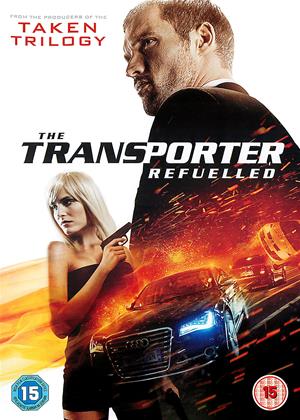 Reviews of The Transporter Refueled

When I first started writing my review of The Transporter Refueled, I was at a loss with trying to remember the picture mere days after seeing it. I initially confused it with Hitman Agent 47 as the two movies share many similarities. They were both released around the same time, both featured bald dudes as leads, both showcase overblown car chases and both based on franchises revived long past their expiration date with the original star long gone. To simplify and separate the two, I took note of their plots. Hitman Agent 47 is the silly action movie about super soldier drugs while The Transporter Refueled is the boring heist action movie.

But how could an action picture where cars flip and bullets fly be a bore? I’m not trying to be a snob when it comes to these seemingly high-octane car chase pictures. The Transporter franchise was actually rather solid for what it set out to accomplish for all its silliness and over the top nature. But those pictures were only as strong as Jason Statham’s performance with his snide attitude and gritty presence. This latest entry in the series has replaced Statham with the rather bland Ed Skrein. With his half-assed attempt at a shaved head and beard, Skrein embodies the low-rent version of the character Frank Martin. There’s no charisma, no machismo and no sense that any of his fights are remarkable. In trying to fill the role left by Statham, Skrein just appears to be playing dress-up.

Shot in Paris, the plot is about as predictable as they come for a gruff guy driving around France. Frank takes on a transportation job with no questions asked. That is until his clients turn out to be involved with crime and then he starts asking loads of questions while he drives and shoots his way towards solving a mystery (or something). All the expected elements are there. There’s a heist that goes wrong. There’s a gaggle of tough girls in the overused bob wig. There’s a mafia plot involving gangsters from (where else?) Russia. It’s a nonsensical script stuffed with as many kidnappings, prostitutes, car chases, betrayals and robberies in hopes that the movie will be more engaging.

But you don’t actually watch a Transporter movie for the plot. It’s all about the fights, chases and stunts, right? And it would be if these showpieces were actually thrilling. There’s a decent car chase where Frank swerves around police cars causing them to flip over each other, but it’s ruined by poor editing. Frank must disarm two men that confront him, but the scene is overproduced with choreography too clean and camera angles too staged. Even moments of discovery are ruined by far too many flashbacks just in case the audience comes down with a sudden case of amnesia. And I wouldn’t blame you if you found yourself forgetting the plot as it will bore you to tears with the mundanity of it all.

The Transporter Refueled doesn’t need more gas - it needs to be overhauled. It’s yet another bland brick in the wall of Luc Besson produced action pictures. Glossy prostitutes and Russian gangsters have become such overused cliches of these movies that they should be parodies by now. Loud music and quick cutting are favored over characters and dialogue that put you to sleep. For a franchise that is all about ridiculous stunts over actual story, this is a surprisingly boring experience even for the most devoted of the Besson fandom. I’m not even sure why this movie needed to be made since the Transporter franchise was continued on through a recent TV series with yet another actor filling the role of Frank. How many more versions of Frank does there need to be in such a short amount of time? And how long will this continue until the producers and directors realize it was a Statham vehicle ill-suited for stand-ins?