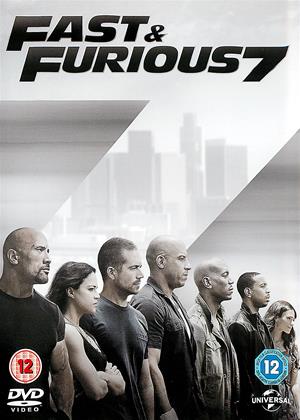 At least you know what you're getting with F&F - an obnoxious alpha-male film that glories in the power of revving automobiles and the view of women as sex-objects. There are the usual couple of OTT set-pieces to wake the viewer but there are no high stakes to encourage involvement. You know Vin ain't gonna get whacked. Elsewhere, maudlin attempts at character interaction are nauseating in their contrivance. And guess what? Such is the state of the multiplex audience these days that three more instalments have already been planned! Cinema has always produced naff franchises for the hard-of-thinking (Connery made Never Say Never Again in exchange for the right to make three more interesting films for Sidney Lumet). So I guess we shouldn't begrudge brain-dead fare such as this if it rakes in money for the industry. It's just that this franchise leaves a bad feeling in the mouth.

Goodbye to Paul - Fast and Furious 7 review by NC

Bit of a tribute to Paul Walker. Ironic he actually died in a car wreck. If like the previous offerings will like this one. The parts cleverly filled in where Paul is on are quite hard to spot. Specials did well.

A high octane, adrenaline fuelled action thriller, everything we've come to expect from this series and much more! There are some fantastic stunts and action sequences and everyone does well in their roles. Nothing new or unexpected here, just a great action film. Given that this is a 12 certificate though, there is an awfully large amount of completely unnecessary and very tacky eye candy, whereby we see a bit too much cleavage and buttock cheeks from skimpily clad women in bathing suits and knickers! One sequence in particular is not only cheap and tacky, but highly unlikely given that it takes place in Abu Dhabi in the United Arabic Emirates, whereby we see lots of scantily clad women walking across the pavements and at the beach in the skimpiest of bathing suits, an offence which in reality would most likely send you straight to prison without trial in a country well known for it's Human Rights abuses! Another scene at a party hosted by an Arabian Prince, shows much the same scenery! One has to question why they chose to show such inaccurate scenes, when if anyone actually did that in this country they would most likely face very severe penalties, perhaps it's showing the hypocrisy of such a regime or sticking two fingers up at it, who knows!? But if you can forgive the tacky show of excessive flesh clearly aimed at a certain type, then this is actually a very good, full on action movie. Highly enjoyable!

In a cinema world where action movies struggle to be both fun and overblown, the Fast and Furious franchise manages to make it look so effortlessly easy. For a film series with so many characters to juggle and too many car chases/battles to count, it never fails to amaze with its delightful absurdity. The tone of the series’ future was perfectly laid out in the previous film where a fleet of muscle cars take down a tank. At that point, you smirk and laugh at either the ridiculousness or the creativity of it all (or both). If the series makes any promises, it’s that it never once bores.

Now here we are at the seventh addition to the franchise, boiled down to the title Furious 7, and it has twice as much energy and excitement as it predecessors. What helps keep this series moving isn’t just the wealth of cars and the Wacky Racer style stunts they perform, but the characters who occupy them. There’s a real sense of continuity and comradery between this misfit group of street racers turned secret agents. Dominic Toretto (Vin Diesel) has heart for his crew and badassery for his enemies. When a new enemy begins targeting his team after sending a bomb to his house, Toretto gathers together the gang for yet another mission.

Instead of following instructions from agent Luke Hobbs (Dwayne Johnson), who spends most of the film hospital-bound from a fight with the lead antagonist, Toretto is now taking orders from giddy covert ops leader Frank Petty (Kurt Russell). He’s a big fan of their work and is open to crazy ideas yet calm when they go awry. Their targets are some wicked men seeking technological domination, played with grit by Jason Statham (simply so we can have Statham and Diesel duke it out) and Djimon Hounsou (the top secondary villain of choice these days). Statham’s character desires to avenge the death of his brother, naturally the villain of the last film, and plans to do so with the MacGuffin computer program God’s Eye. With this tech he can directly target individuals and dispatch them with armed drones (or spaceships as Tyrese Gibson's characters refers to them as), leading to one of the most destructive chase scenes in the series yet.

There's a reason to generally care for all these characters being hunted in how they’re playfully portrayed. Tyrese Gibson plays up the comic relief hilariously in how he demands to take the lead on a mission and smooth talk his way at a party as the diversion. Chris Bridges is mostly relegated as the IT man of the group, but has surprising moments of physical deception when cornered by the enemy. And how could you not dig Kurt Russell in a role where he quite literally winks at the camera. Every single actor in this piece seems to be having a great time as they’re all given their little sections to shine. Even Dwayne Johnson gets a chance to burst out of his hospital gown, break his cast with his muscles and slip into a minigun for the grand finale ("Daddy's gotta go to work").

Not content with simple chases around city streets and country roads, director James Wan continues to push the bar for the series by keeping more of the vehicles in the air than on the ground. Rather than find a way to sneak some cars onto a secret road for an assault on an armored truck, all the vehicles are launched out of a cargo plane so they can skydive down to their target. Parachutes deploy, the drivers land their vehicles and proceed towards their target without any injuries from such a touchdown. If something like that sounds insane, your mind may just melt from the absurdity of Toretto driving a car mid-air through not one but two buildings. I swear, if there were more skyscrapers in the area, this scene would keep going until his car was low enough to the ground to hit the street and drive off unscathed. Maybe they’re saving that bit for the sequel.

Of course, the most timely draw for the picture is for being one of Paul Walker’s final films, having died during production. His replacement scenes are hardly noticeable at all, but the film doesn’t let you forget about Walker with a touching send-off to the character. It may sound forced, but it’s actually rather touching and fitting to both pay tribute to Walker and provide a satisfying end for his character arc. It helps alleviate some of the unpleasant reminders of his demise with several cars crashing directly into one another and exploding.

I didn’t think anything could top the take down of a tank and a massive plane in the previous film, but director James Wan found a way to make Furious 7 even more over the top and bombastically fun. These have to be some of the most elaborate and insane action sequences I’ve ever seen that the Mission Impossible and James Bond franchises should take note. In addition to all the frenetic energy, Wan carries on with the quality standard of likable characters, exceptional camera work and lavish locations overflowing with cars and women. It’s just damn good action filmmaking that aims to be as entertaining as possible. For being the seventh film in the series, there’s still enough nitro left in its boosters for at least one more lap.