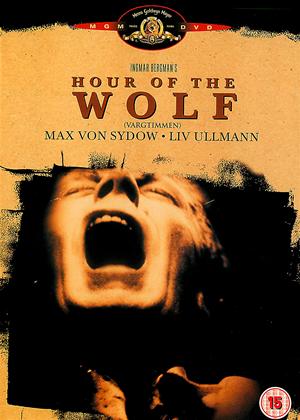 Reviews (2) of Hour of the Wolf

Bergman's Blunder - Hour of the Wolf review by CP Customer

This is the weakest of the Imgmar Bergman films I've seen but still blessed with disturbing and hallucinatory that made the short running time worth my while.

It opens with Johan Borg, played by the superb Bergman regular Max Von Sydow, as he shows his wife drawings of his graphic visions.

This sets the film really well but takes a nose dive as the images become more upsetting, blurring the boarders between reality until we aren't sure what is real ourselves.

'Hour of the Wolf' is enjoyable to a point but as the plot progressed I lost interest in the protagonist and when the ending was in sight I was willing it on!

Spoilers follow ... - Hour of the Wolf review by NP

Director Ingmar Bergman’s familiarly bleak and windswept isolated island (Baltrum) is the retreat of artist Johan Borg (Max von Sydow) who is recovering from an unspecified illness. His pregnant wife Alma (Liv Ullman) loyally and sensibly looks after him and oversees such necessities as finance and food, whilst Borg lapses into a dream-world where he sees ‘demons’ – strange people who resemble people he has known. Before long, Alma too sees someone, an old lady, who may or may not be real, who advises her to read Johan’s diary, which reveals one of his ‘demons’ is former lover, Veronica (Ingrid Thulin).

I found ‘Hour of the Wolf’ a little ponderous. Bergman’s films are often exercises in introspection, but this is too uneventful: we know Johan is facing some sort of breakdown, and yet events are merely there to prove it to us again and again. Only an incident at a party – seemingly attended by ‘demons’ – stands out amongst the surreal mirages painted on Bergman’s typically desolate canvas. The acting is never less than intense, with Von Sydow in particular tuning into the director’s wavelength. Ullman, too, is sympathetic as loving protector Alma, who has some dialogue midway about wanting to be with her husband for such a long time that she begins to think like him. In the final coda, she ponders that if she was *less* like him, perhaps she could have protected him better.

I wouldn’t say ‘Hour of the Wolf’ is less interesting than it thinks it is, rather that the situation and characters don’t have quite the resonance with me that those in some of Bergman’s other projects have.