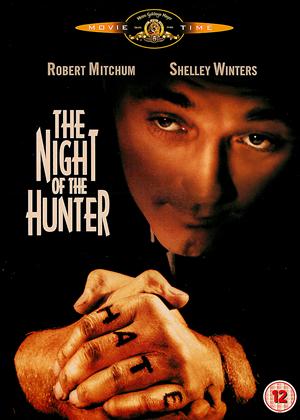 Rent other films like The Night of the Hunter

Reviews (3) of The Night of the Hunter

It was ahead of its time in many ways and has influenced generations of directors. Originally intended to be a suspenseful thriller, this is no longer the case. The sets and scenery, together with the 1950's acting style make this film more of a fairy tale (it has a strange and unexpectedly ethereal quality) in spite of being based on a real murder.

American Gothic. - The Night of the Hunter review by Steve Mason

Robert Mitchum plays Harry Powell, a psychotic serial killer presenting as a preacher ('How many is it now Lord? Six? Twelve?'- it turns out to be 25) based on a real murderer of widows in the American south of the depression. He weds Willa (Shelley Winters) in order to extract from her two young children the location of the loot from a bank robbery carried out by their father who has been hanged for murder.

After the preacher marries Willa, he doesn't just kill her and leave her body among the weeds in a river, he spiritually tortures her. The children escape downstream, chased all the way by the nightmarish figure of their new stepfather. Everything in this world is cruel and threatening. The country is scorched by the flames of poverty. Religion has gripped the minds of destitute and uneducated people and distorted them. When the children reach the sanctuary of Lilian Gish's orphanage the sense of relief that this boy and girl at last have some protection is overwhelming.

Laughton's only film release is notoriously difficult to categorise: part horror, part fantasy, even perhaps a film for children. It's often called film noir, though its historic, rural setting isn't all that noir, and neither is its prominent religious theme. Part of the difficulty of classification is that it is unique. Even its imitators haven't repeated its genius.  Today, most commonly it is called American Gothic, a sub-genre of horror.

Whatever, it's one of the great American films, full of haunting, beautiful images. Stanley Cortez' strange, oneiric visions are among the most enchanting in the galleries of cinema. Mitchum is phenomenal and Billy Chapin gives one of the great child performances. James Agee's script (revised by Laughton) from Davis Grubb's excellent novel is just beautiful. But its Laughton's film, the work of an auteur, one of the great examples of cinematic art and it is such a regret that it is his only film.

This film never ceases to send shivers down my spine. Clunky, dated and a bit hammy at times, the silhouette of a picket fence and that haunting voice singing an old Southern hymn is more foreboding than any CGI horror with crashing orchestration.