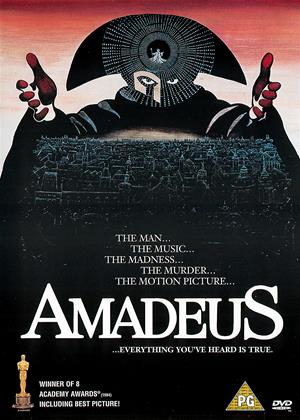 Stage plays and movies are very different beasts, and it takes a lot of adaptation to turn one into the other. Therefore a great deal of explanatory dialogue from the original play has been cut in favor of "show, don't tell", with the exposition they couldn't do without confined to framing sequences in which the aged Salieri tells the whole story in flashback. The decision to allow all the actors to use their normal accents when they're mostly supposed to be Austrian or German, and the modernization of some of the dialogue, is occasionally a little jarring, but it's better than having them adopt "ve haf vays of making you talk"-style German accents for the entire movie, or speaking in that stilted historical drama version of English that doesn't permit anyone to sound natural or relaxed. They do in fact talk this way sometimes, but only when they're in the Royal Presence and are required to be excessively formal.

Visually, it's stunning. Modern Prague stands in very well for 18th. century Vienna, and since Mozart divides much of his time between staging operas and going to lavish fancy dress parties, the set and costume designers have plenty of opportunities to let their hair down. Of course, it goes without saying that a movie about Mozart has no problems in the soundtrack department, especially when internationally renowned performers are involved. Where it falls down slightly is in the oversimplification of the characters. It's a historical fact that Mozart was a rather irresponsible man with a childishly scatological sense of humor, but Tom Hulce turns the irritating buffoon dial up to 11 and gives him a laugh like a dying hyena and borderline mental retardation in order to emphasize how different he is from the frigidly repressed Salieri, to the point where, on those occasions when Mozart gets wrapped up in his music and stops behaving like the Fourth Stooge, it's easy to see why Salieri can't comprehend how this moronic clown can possess such talent, since the viewer can't believe it either.

F. Murray Abraham is far better as Salieri, a vain egotist so utterly self-centered that he's incapable of realizing the extent of his own selfishness, whose tragedy is that he's a good enough composer to know how much better Mozart is, and simply cannot bear the idea that this potty-mouthed fool has the talent he, a clearly superior human being, deserves and has always longed for. However, the character is just a little bit too one-sided, as well as being wildly unfair to the real Salieri, who seems to have gotten along pretty well with Mozart, and certainly didn't murderously hate him, let alone actually murder him!

I also had a slight problem with certain unrealistic aspects of the story (which is, after all, supposed to be about real people and events). Naturally, the screenplay being based on a play by Peter Shaffer of "Eqqus" fame, it's no big surprise that the symbolic Freudian psychodrama is laid on with a trowel. But although the closing section is very powerful, partly because the physically and mentally shattered Mozart no longer has the energy to be annoying, I just didn't buy the idea that Salieri's suitably Freudian but extremely far-fetched method of destroying his rival would stand the slightest chance of succeeding.

So overall, not perfect, but very good indeed, to look at as well as to listen to. Though if you're just going to watch it for the musical numbers, you'd be better off with a few CDs so that you can hear them all the way through.

Deserves no less than a 3 because of F. Murray Abraham's fantastic performance as Salieri - rightly earning an Oscar. But I found the film a bit disjointed, overlong and some of the characterisations grating - notably Mozart himself and his wife. But the sets, costume design and (of course) music were fabulous.

Middle of the road bananas, all round!

A sumptuous period drama and a tale of jealousy, rivalry and of a genius and above all a story rich in music . Although centred around the story of Mozart this is only a part biopic and is mostly a work of fiction. Set in the late Eighteenth Century with a beautiful visual recreation of Vienna this tells the story of the relationship between Antonio Salieri (F. Murray Abraham), the music composer to the court of Austrian Emperor Franz Joseph (Jeffrey Jones) and the young Wolfgang Mozart (Tom Hulce), a promiscuous vulgar clown who also happens to be a genius composer. Salieri grows to hate the young upstart for his talent which he believes is undeserved and vows to destroy Mozart, yet still finds his music utterly divine and magical. This story of envy is wondrously told and with two brilliant central performances bound together by the fantastic music and scenes from the operas of both composers. It's told in one big flashback as Salieri as an old man confesses his jealousy to a young priest having attempted suicide. Even if classical music is not to your taste this is still a film that will enthral as it is such a joy, with humour and sadness. It's depiction of the times is on a par with Kubrick's Barry Lyndon (1975), and the use of natural light is especially reminiscent of that classic film, and the style made me recall Richard Lester's The Three Musketeers (1973) with the detailed crowd scenes. Ultimately this is a story of self destruction, a sad film but one that is a rich viewing experience I really recommend it if you've never seen it (ensure you watch the Director's Cut).

Oh dear, this has not translated well to American influences and the very big screen. A wonderful and mesmerising play. A dreary, irritating, and poorly paced film. The American accents grate (OK, Mozart's wife was probably ill educated, but would she grimace like a cheerleader all the way through and utter comments like 'Whass-the-ma''er?'.) The music interludes, generally, are glorious so I'd suggest fifteen minutes at the beginning, then keep mute and fast forward until the Mozart figure is off screen. And what happened to Simon Callow? Such a wasted opportunity by Milos Forman, which is made clearer when you read 'My Life in Pieces'. Bad. Truly bad.