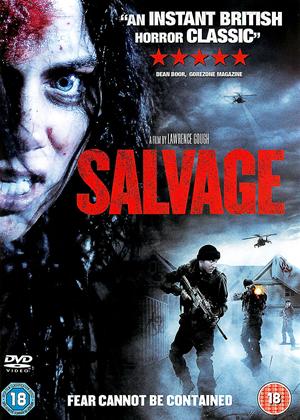 Synopsis:
It's Christmas Eve, and the residents of a quiet British cul-de-sac are suddenly plunged into a world of violence and terror when a group of heavily armed military personnel arrive and order them at gunpoint to remain in their homes. Unsure if it's a terrorist attack, or something much worse, one local mother finds it in herself to desperately fight to save her estranged daughter stranded across the street. However, with growing fear, the residents soon discover that the threat is more monstrous than any of them could possibly imagine, and survival is no longer a guarantee...
Actors:
Shahid Ahmed, Dean Andrews, Sufian Ashraf, Ben Batt, Linzey Cocker, Shaun Dooley, Trevor Hancock, Kevin Harvey, Paul Howell, Neve McIntosh, Ray Nicholas, Paul Opacic, Alan Pattison, Martin Pemberton, Debbie Rush
Directors:
Lawrence Gough
Writers:
Alan Pattison, Colin O'Donnell
Studio:
Revolver
Genres:
British Films, Horror
Countries:
UK

It’s nearly Christmas and in an English cul-de-sac, things briskly go from bad to worse. Young Jodie (Linzy Cocker) has come to visit her wayward mother Beth (Never McKintosh) and finds her in bed with an unknown man (Shaun Dooley); stomping away to the neighbour’s house, there’s then a raging argument in the street as she begs for her daughter to come home. In the middle of this, a helicopter overhead signals the arrival of a squad of military men in combat uniforms who promptly shoot the antagonistic Asian neighbour. Terrorism? Quarantine? Who knows?

In one of several unexpected twists, we then stay with Beth for the bulk of the story, as revelations about the true nature of events slowly come to light. She becomes almost feral as she survives death time and time again, and only when she at last finds Jodie cowering in the darkness of her neighbour’s is there cause for hope.

SPOILER – a genetic experiment gone wrong has produced a number of deformed killers, all of whom have been destroyed – all but one. To keep the situation a secret, a squad of military men swarm and evacuate the cul-de-sac, killing anyone who has discovered the truth. As often proves to be the case, the human beings who have caused the problem are also the cause of the death and destruction ‘necessitated’ by the need to keep it a secret. The briefly seen creature is not someone you can feel sorry for – a gurgling, screaming rampant, mindless killer.

Without giving anything further away, there is no happy ending to this, as young Jodie’s screams usher in the closing credits. The stark mood of ruthless killing and suburbia turned into a hell-hole is effectively showcased and nothing is every predictable. This is a hidden gem of economic story-telling. Happy Christmas!