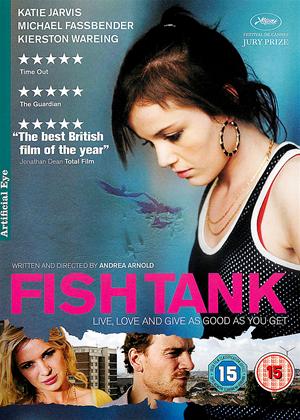 A real highlight from 2009 is Fish Tank where Andrea Arnold finally delivers. I wasn't that impressed with her previous film Red Road, however she's learned from that experience and crafted a candid and startling portrayal of teenage life on a UK housing estate. Katie Jarvis is terrific in her first ever role; substituting her own life experiences for her onscreen character. The end result is an experience that will provoke debate and some sadness at the state of our inner cities and society in general. Also another fine performance from Michael Fassbender.

I wasn't expecting this.

At first, you think it's going to be a poor british film, but after a half hour or so, you become intersted in the lead actress and the life she leads-or has no choice but to lead.

a moving and brilliantly acted ensemble. i was never sure what characters might do next but they still felt true to life. one of a few, highly recommended, recent british films. plus it features a true bobby womack classic!

Perhaps too true to life for some people. There was nothing good about this film. The current recession is making life hard for most people due to the uncertaintity about the future, so we need a bit of escapism which you do not get from this film.

I come from the same homw town as the dirctor and I can tell you that is is mostly middle-class suburbia too! So the portrayal of it as some kind of awful sink estate in dishonest.

What we need are good stories well told - that is what we need in the British film industry; not this awful tedious pity party - this film is typical of all that is wrong with British film-making.

Mia's mother moves her boyfriend Connor in. Mia finds Connor not only useful as a source of cash and a video camera to record her dancing - which he encourages - but also finds him attractive. There is a certain inevitability as we watch the film that things will almost certainly go wrong - and of course they do. Mia's world slowly unravels as she has sex with Connor, find out that he is (of course) married, that (of course) he has a child and that her dreams of becoming a dancer are (of course) hopelessly unrealistic.

Yes, it's a downbeat film – but it has a realism and feels so true to a certain gritty slice of life and the personalities and the f-ing and blinding that goes with it that it is very watchable through to its ending which is happier than you might expect. 5/5 stars. Highly recommended – but it's a film to admire rather than like.

A troubled, miserable 15 year old lives a joyless life with no talent and no hope. The plot is haphazard picking out episodes of despair apparently at random as she slides into the moral and emotional abyss. This unstructured, shakey hand held camera format gives it a greater air of impoverishment. At the end a pall of gloom will envelope you for days. It is not really what I want from a film. Watch if you need bringing down.

Katy Jarvis plays Mia, a rebellious, troubled and tough teenager, with dance aspirations. Underneath this hard exterior though are glimpses of a caring girl, who given a different environment and a mothers full love and attention, one could see Mia being a different person altogether.

Kierston Wareing is great as Mia's mother, more interested in partying and men than giving her daughters a proper upbringing. Rebecca Griffiths is great too, as Mia's younger sister Tyler, a future Mia in the making.

Last, but not least of the main protagonists is Michael Fassbender as Connor, Joanne's latest love interest. A man who appears to be kind and interested in the kids as well as just the mother, Fassbender gives a strong performance.

It is Katy Jarvis though who gives the outstanding performance here, unbelievably in her acting debut. Apparently she was spotted on a railway station by a talent scout working for the director. A fact that is more unbelievable is that before Fish Tank she had no acting credentials.

This is the first feature I have seen by this director and am more than very impressed with this phenomenal film. Will definitely be checking out more of Andrea Arnold's work.

Dreadful, a lot of swearing, OK in some instances, but it has to have something else going for it, not just dancing and

jumping up and down.

A game of two halves - Fish Tank review by Promessi

Initially we get a rivetting picture of a lowlife household with mum and two daughters (15 and about 8 yo) Fassbender turns up as Mum's fancy man and sets about redeeming all three with his humanity and charisma. But both plot and themes become less and less plausible the further we go. The three witches are transmogrified into three angels and it is all too cosy nice-nice.My favourite absurdity is the Usain Bolt turn of speed by a tiny tot as part of the climax : if you have chortles prepare to guffaw them.