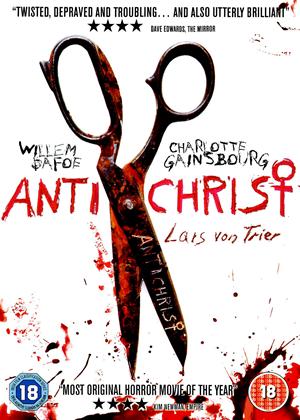 Anti Christ is a savage and unforgiving drama from Lars Von Trier but we would expect nothing less given his track record. Already infamous due to that scene which has upset so many, Anti Christ proves to be far more than just graphic self-mutilation. Instead we follow a couple as they descend into the depths of depression and despair following the loss of their child. This is not a pleasant experience, nor should it be given its subject matter. The film is beautifully shot and is extremely dark. Like Martyrs the violence is graphic yet the production standards are high end European. In reality the film only has a cast of two; both perform exceptionally well given the exposure and rigours they must endure. And when that scene arrives I really questioned what the fuss was about in an age where we have to endure Saw and its competitors. Anti Christ is a difficult experience but one worth enduring although it is far from the great film that many have suggested.

Definately a woman to avoid! - Antichrist review by CP Customer

we spent a friday evening watching this and what a waste - we cannot understand the previous good reviews as this was a truly awful, truly boring film and we would absolutly not recommend it to anyone.

The antithesis of something worth watching - Antichrist review by ME

So utterly tedious that even when suddenly confronted with either scenes of graphic sexual depravity, or the scenes featuring some of the gorier sides of nature, I felt no emotional response.

Lars von Trier’s unofficially titled ‘depression trilogy’ of films begins with this, continues with ‘Melancholia (2011)’ and concludes with the mammoth and quite excellent ‘Nymphomaniac (2013)’. ‘Antichrist’ isn’t easy viewing.

Rutting like animals, He (Williem Defoe) and She (Charlotte Gainsbourg) fail to notice their toddler son Nic climb onto the open window ledge and fall from the balcony to his death. Subsequently, understandably consumed by grief, the couple hike to an isolated cabin in Eden woods, far from anywhere. The husband is a therapist and feels he can manage his wife’s at times uncontrollable misery.

I found this a good deal less engaging than the substantially longer ‘Nymphomaniac’, and approach the final film in the trilogy with an open mind. The story begins on one level of graphic imagery and despair, and remains at that level throughout. There is no real let-up or drifting away from the overwhelming intensity of it all – which becomes less intense because of its ubiquity. Defoe and Gainsbourg are excellent throughout – you really get the impression actors suffered in the creation of these roles. Director Frier has said that ‘the film was finished without much enthusiasm’ due to his fragile mental state at the time, and while the acting betrays no such lack of commitment, the overall effect sadly in accordance with Frier. I should add, the direction here is magical, if perhaps a little heavy-handed.