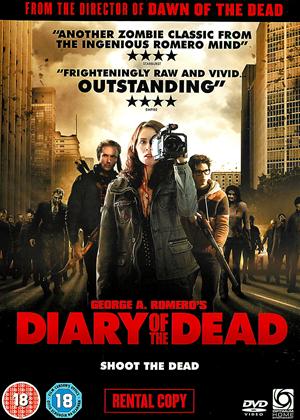 Reviews (3) of Diary of the Dead

Lacking bite - Diary of the Dead review by CP Customer

A disappointing return by Romero to the zombie genre. Here we follow a film crew as they try to get home and the undead begin to rise. It is done in a style made popular by JJ Adams' Cloverfield but thankfully Romero avoids the over use of shaky-cam, so motion sickness is never an issue.

The director has always integerated social commentary with his previous zombie films. Here it is a little too obvious and is not enough to maintain your interest. You do not identify with the characters or their fates at all.

Very much a weak entry in the zombie series.

This is easily the weakest of George A. Romero's zombie films. Romero's 'Dead' series always have had a B-movie quality about them, but what set them apart from other run of the mill zombie movies was a subtle and clever social commentary ranging from racism to consumerism. The trouble with 'Diary of the Dead' is that like other films in the 'Dead' series it does try to have a social message, one about the rise of 24 hour media, reality TV and the quest for instant fame. The problem is that the social message Romero tries to make is so dumbed down it just comes across as yet another cheap zombie movie, with average special effects, lousy acting and a predicable storyline.

Spoilers follow ... - Diary of the Dead review by NP

There’s something faintly ludicrous about the opening shots of this ‘found footage’ entrance into George A Romero’s entry into his ‘Living Dead’ series. A live news broadcast is interrupted when corpses in the background come back to half-life and start attacking those around them. To me, found footage works best when you don’t see too much – the characters on screen reacting to something out of the audience’s vision works very well in that style. Fully made-up zombies fit better into a more stylised, ‘professionally filmed’ scenario.

Things don’t improve hugely when we meet a film crew, including actors playing actors playing both in front of, and behind the camera. ‘Hilarity’ ensures when two cast members ‘have to pee’, leaving the rest to view on the news reports how the dead are coming back to life. Amongst the teens, we have a uproariously well-spoken elderly ham Andrew Maxwell (Scott Wentworth) who clearly feels he’s demeaning himself by appearing in the film being made. Whispering, identical horny youngsters, someone (Jason – played by Joshua Close) who films *everything* despite being repeatedly asked not to, posturing, wall-to-wall expletives – all the staples of a teen horror, and by Romero’s standards, BAD. Apart from anything else, the advantages and unique qualities of the archive formula are simply not used here. The ‘story’ doesn’t need to be told in this way, and is just a gimmick. Could it be Romero was seeking financial success by attempting to attract the youth demographic?

It is explained at the beginning that, to make events more frightening, the young film-makers have added incidental music to events – and yet failed to edit out moments when (as is always the way in these things) the cameras start to fail and cut off.

Anyway, as events fail to progress, I am gagging for some cadaverous zombie to limp in and violently dismember people. When they eventually turn up, they are half-hearted, under-made-up and easily dispatched. The alleged good guys remain personality-free, rather a growing band of posers ‘doing what they gotta do’. How did Romero allow this to be made? To spend so much time with these people and for not one of them to effect any kind of personality for the duration is one thing, but when the undead action is as scarce as it is here, it makes for a hugely dull experience.

Happily, the next in the series ‘Survival of the Dead (2009)’ is a huge improvement on this.