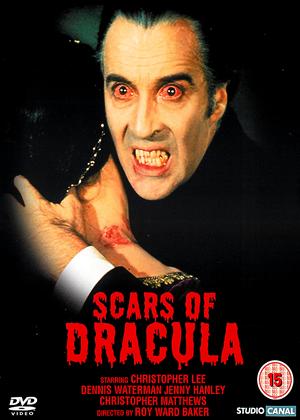 Reviews (1) of Scars of Dracula

Although Hammer’s horror films were becoming more prolific by 1970, there was a definite downturn in their fortunes: audiences were falling out of love for their modest-budgeted gothic tales.

Released shortly after ‘Taste the Blood of Dracula’, the drop in quality for this latest offering is noticeable, both in budget (there is a very studio-bound feel to Dracula’s castle for example) and in interesting new ideas (Dracula’s life-saving blood-spewing personal bat is particularly unsuccessful).

Rather than an ongoing story, ‘Scars’ is more a series of set-pieces. The exploits of rakish Paul Carson are directed like an episode of the lame sex-comedy ‘Confessions of…’ film series. We then have the slaughter of a church full of villagers we never get to know, various sadistic acts by Dracula (as well as a partially successful scene of him crawling snake-like down the walls of his castle, lifted from the novel – presumably keeping Christopher Lee happy) and finally the least convincing climactic despatch of the Count by lightning as Dennis Waterman and a badly dubbed Jenny Hanley watch on.

Although it gives Lee more to do than most sequels in this series, it is nevertheless a palpably tired offering and wastes most of its cast. Hammer were surely aware of the paucity of ideas on display and decided to make a fairly big change with their next Dracula film.