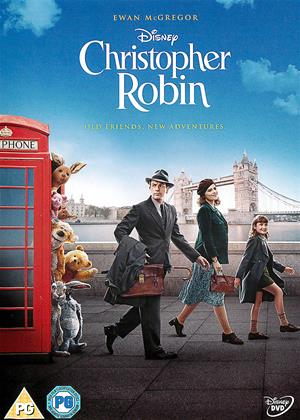 Why? - Christopher Robin review by EJ

This really is a weak film and not very well acted by any of the cast. I’m not sure if I actually kept my mind on it! I hope it didn’t cost much to make, as it would not have been worth it. Avoid!

Kids just about hung on. - Christopher Robin review by NC

Not as good as Paddingtons, or Peter Rabbit. Similar concept. This a bit more like Norman Wisdom on day out with his Teddy. Pleasant enough, and kids just about hung on past all the dialogue. Kids like action...........

Its OK but nothing Special - Christopher Robin review by KW

Watchable, but if you are looking for an new insight into the phenomenon that os Winnie the Pooh, then this is not the vehicle.

Hard to see who it's for - Christopher Robin review by PC

This film is far too slow for children and lacking on any great story line to keep adults interested. I thought the acting was fine, however, nobody is given great material to work with. There were pot holes that made no sense, I appreciate that I am talking about a Winnie The Pooh film but how can everybody see them when they are clearly a manifestation of Christopher Robin's mind.

This started off so-so BUT soon descended into an utter pc mess of a movie.

I hated the CGI toys with American accents - as in the early 70s Pooh movie which is a large influence here. The Sherman bros songs are great BUT this movie is not.

Totally miscast MacGregor - with a dodgy posh English accent; he lives in a house worth £3-5 million probably but apparently works in a lowly managerial job. The same nonsense was in the superior Paddington films which this one aims to ape, and fails badly - in the books Paddington lives in a normal suburban semi, not a Georgian mansion in South Kensington!

His wife totally miscast and the character unbelievable - this is set around 1946 and NO woman of any decency would behave as she does and disrespect her husband so much and basically dump him for being a good father (though not a helicopter dad 21st C style). And the box-ticking in having a daughter who is a 'strong independent woman in the making' is cringe-worthy.

The diversity box-ticking stinks too - this is 1946 SO hardly any black people in Britain and yet we are led to believe tjhat Christopher Robin;/s secretary is a black woman, and his luggage firm has 3 black employees in a management team of 15. GIVE ME A BREAK! Totally ruined ANY sense of realise - impossible to suspend disbelief with this pc casting, as it would be if a Zulu tribe in Africa had 3 white ginger members! GET REAL, PEOPLE!

The whole thing misfires on all levels. Avoid, 1 star - for the songs.

Well, I enjoyed it! - Christopher Robin review by HH

A lovely gentle film, and I didn't feel preached to, nor did I recognise the political correctness (I usually do). I didn't find Ewan MacGregor miscast, but I hated the voices of Winnie the Pooh and friends - American.......Noooooo! As someone who read the stories as a child, the Disney version of the animals is so wrong. However, I would recommend this when you want something pleasant to watch.

Pooh and eeyore were good - Christopher Robin review by AL

Nothing over exciting, not sure how kids would cope as there is far too much time spent with nothing in particular going on.

Pooh and his friends looked great, and were certainly the best part of the film and personally I preferred the young Christopher Robin to Ewans adult Christopher Robin.The older version just seemed like an actor going through the motions and was just a bit lack luster.

If you enjoy Norman Wisdom you may enjoy this! - Christopher Robin review by Brummie

Okay it’s not a Disney classic, but it had me laughing at some of Pooh’s antics. In a way I don’t think it’s a film for young children as I don’t feel they’d understand what is meant in some of the dialogue - I think it would go over their heads. I am 65 and have been to the hundred acre wood portrayed in the film with my children, and I have to say I enjoyed the film. Nice not to have violence. It’s not overly long so I didn’t find it boring. May be one to watch at Christmas as it features children.

Seen a lot of negative reviews about this film and it passed me by at the Cinema...so don't quite know how it was marketed...but I imagine judging by the negative reviews, either it wasn't marketed at the proper target audience (teens to adult) or people with small kids simply assumed that because it had Pooh et al in it that it was going to be appropriate for tiny kids and it kind of isn't!!

If you have seen Hook or Finding Neverland then those films put you in the frame of mind for this...because this is what happens to Christopher Robin once he has left his childhood things behind! The opening sequence of the film sets up what you know of Christopher Robin and his 100 Acre Wood friends...but sees them saying goodbye to Christopher (he is leaving them behind).

Needless to say Christopher's adult life is strained by the workload he has and in the moment of the film, because he has been tasked to find a solution to his companies falling profits...his wife and daughter are mostly abandoned it would appear because of his work and thus as he is left alone again for the weekend because he can't go to the country with his family with the things he must do for the presentation he has got to lead on Monday...cue the return of an old friend...who has lost his other friends...

From there, the story centres around the two estranged pals and they involve themselves back in each others lives...as a grown man, I can tell you that this is a wonderfully told tale and pulls on the heartstrings quite a lot! I'm not ashamed to say you'll need some tissues...it gets quite emotional in parts...but has the right amount of silliness that you would expect as a Winnie The Pooh fan!

The acting is superb on all accounts, the visuals of Pooh, et al are amazing in the real world! Even though it is essentially a period piece, it speaks a lot of truth about the importance of work/life balance and all in all I thoroughly enjoyed this movie...as did my wife! So I would highly recommend this film if you are older than say 12, I think children of that age upwards will understand the real-world elements intertwined in the plot a lot better than younger children who would expect what they have seen in the cartoon versions perhaps?! It is not one to put on to keep the kids quiet...it has a deeper level than that.

With Disney striving to rework all their animated properties into live-action, it was inevitable that Winnie the Pooh would receive the computer-generated slap of reality. My fears ran high of merging Pooh and his pals into the real world, made evident by the cringe-inducing hipness of The Smurfs and Alvin and the Chipmunks. Those concerns can be put to rest for the Hundred Acre Wood merely making a field trip to a post-war London. So while there’s no need to worry about Pooh dancing to dubstep and duplicating the latest in meme moronity, he must still plow through a story so familiar of the likes of Hook about growing up but never “growing up.”

Despite a CGI glaze, all the Hundred Acre Wood characters are faithful as they haven’t lost their step or bounce. Pooh still loves his honey when not making obliviously silly observations and Eeyore is still the loveable sad sack he’s always been. Christopher Robin, however, has changed. When off to boarding school, he leaves behind his talking stuffed friends of the fantastical woods. Boarding school leads to the war, war leads to family, family leads to a desk job. He’s all work and no play, now played by a worrying Ewan McGregor. The adult Christopher Robin could use a rousing adventure of imagination and play.

In comes Pooh to save the day, wandering to London to seek out his missing friends. Given how lost the animals can be without Christopher, I’m surprised they lasted this long without seeking him out. I can only imagine how darker the film could have been had they sought him during the war. The usual antics of entering Christopher’s adult world occur; Pooh will make a mess of the kitchen and freak out a businessman on the street with his presence as a talking teddy bear. That’s to be expected. In fact, most of the story arrives on schedule, hammering its message bluntly home that there’s more to life than working.

There’s thankfully a warm core to the story despite the heavy-handedness. Where the film finds its best groove is by the time Ewan McGregor rediscovers that more playful Christopher Robin, eager to venture around the Hundred Acre Wood and do battle with the imaginary Heffalump. Ultimately, it’s the stuffed CGI characters that endure the most as they never lose their edge. If anything, they grow fonder and empathic, reasoning that Christopher has done so much for them that they should do something nice in return. Even when required for slapstick antics of making messes, scaring the populous, and slamming into windshields, there’s something so loveable about their personalities that transcend whatever medium they’re presented within, given that Pooh has existed over the years in video games and puppetry.

But, wow, does the film tap dance that melodrama that feels more artificial than the sweetness. Needlessly dipping into the somberness of an aging Christopher Robin, the story cuts between scenes of war and depressingly pushing his family away. On the other end of the picture, Christopher’s eventual realization of where his priorities lie is presented in a strangely cartoonish manner of an after-school special reviewing what was learned today. If it weren’t for the oddest presence of all the Hundred Acre Wood creatures, the cliches run high and dry that the charm is under attack by the lesser staging of seeking simplicity in adulthood.

I love Winnie The Pooh and wanted to love this film more for its insightful and interesting characters that must run through a relatively safe story. Watching the film go down this route makes one merely shake their head, smile, and sigh as Christopher Robin had always done with Pooh when his head was caught in honey.