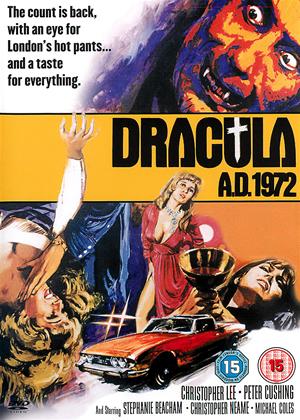 Dracula is Alive and Dead and Well and Living in Chelsea! - Dracula A.D. 1972 review by NP

In a move that seems to confirm the events covered in 1958’s original ‘Dracula’ weren’t the only time The Count fought his enemy Van Helsing, this updating of Hammer’s vampire myth begins with a spectacular scuffle between Peter Cushing and Christopher Lee atop a speeding stagecoach. The grim and gruesome climax results in the death of both, revealing a continuity error – events covered in ‘Dracula’ happened in 1885, 13 years after this prologue. Perhaps the Van Helsing featured there was a relation of this one!

The decision to move the Lord of the Undead into modern times has been lambasted over the years by horror fans, not least because the hip dialogue between the hippy gang was dated even then. The intervening years have been forgiving however – viewed now, this updating is now a period piece, and phrases like ‘Dig the music kids’ seems to be part and parcel with the overall ‘flares and winged-collars’ styles of the day.

There’s a knowing, pseudo-parody feel about this too. Describing a victim as ‘a bit drained’ and inviting someone to ‘come in for a bite’ evokes an atmosphere at odds with the grim and serious presence of Dracula and his various machinations, giving the impression Hammer weren’t entirely confident about the direction in which this series should go. Their recent ‘Horror of Frankenstein (1970)’ was laced with similar comedy and was received very poorly.

After bringing their vampire into the then present day, the writers then decide to keep him very much apart from it. All Dracula’s scenes take place in or around a deconsecrated church, and any interaction with life in 1972 is left to Christopher Neame’s enjoyably over-the-top Johnny Alucard. His fight with Van Helsing is a high-point (lots of nice directorial moments from Alan Gibson), but it does rob Dracula of screen-time, as usual.

This is good fun though, in much the same way Universal’s latter-day horrors were good fun – little in the way of actual horror atmospherics, but a fast-pace monster piece. And to its credit, the now traditional decomposition of Dracula in the finale is one of the most gruesome of the entire series.