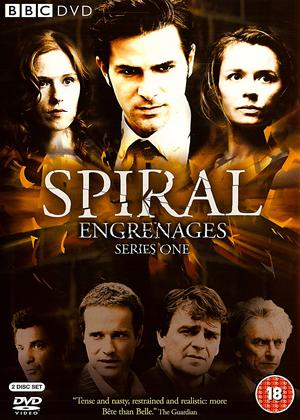 After watching the excellent French cop series 'Braquo' I went looking for more in the same vein, and came across the most excellent TV series 'Spiral'. This had previously been shown on BBC4 but I missed it there :(

The English title doesn't give much of a clue about the content - the original title is 'Engrenages' which translates better as 'gears' or 'cogs', and perhaps 'enmeshed' as in how gears engage gives a better sense of the characters and storyline.

First let me say again that it really is excellent. Not only is the story gripping but the characterisation is excellent with sufficient details about both working and personal lives to make you care. Added to that, the series gave a rarely seen view (perhaps inevitably coloured through the eyes of a TV series) of a different justice system. France has an inquisitorial justice system rather than the adversarial system of England. In 'Spiral' this is shown by an examining judge (juge d'instruction) instructing the police in the course of a serious criminal case, meeting all parties and investigating and hearing evidence from the various sides, and deciding whether to send the case to trial. I found this difference in the English and French judicial systems quite fascinating to watch. I understand that in real life only a small proportion of cases are dealt with directly by a judge in this fashion - but hey, this is TV.

As far the storyline, it goes something like this... The badly disfigured body of a young woman is found in a skip. An autopsy reveals the clue that she may be of Eastern European origin. A missing person report leads to her sister (who is still missing) and to activities as a high class call girl, the sister's body is found, and the case leads further to a case of sexual corruption at the highest level. Throughout the series a number of quite disturbing images are shown of bodies and autopsies and this, together with other assorted violence and the subject matter rate this as certificate 18 material.

The characters are very well played - the baddies are violent, the goodies are human and likeable, and there are ambivalent, flawed characters, including a coked-up police officer and a defence lawyer who strays onto the side of the baddies. The dialogue is fast moving (too fast and colloquial for my limited French) and the subtitles are in proper English, not American.

The central thread of the story remains throughout, but each episode contains snippets from other cases which gives a rich feel to the series. There are 2 discs, 4 x 50min episodes on each. I found it gripping and watched Disc 1 straight through in one session; there was a delay of a few days until Disc 2 arrived, and again I watched that in a single session. Well directed, well written, well constructed plot, well filmed, good locations - and excellent acting. Really, really good.

I rated Series 1 of 'Braquo' of one of the best cop thriller series I have seen: while 'Spiral' is different - it's not a thriller, but is just as gripping - I rate it as even better. Superb stuff - 5/5 stars - highly recommended.

Just came across the Spiral series recently on BBC Four, then discovered it was Series 5. So happy to find Series 1-4 on Cinema Paradiso!

Only watched Series 1 of those so far but already it filled in a lot of gaps for Series 5 that I'd been wondering about. It's just such a clever, exciting tv series where the characters are really well developed and all the acting is great! Plus, I'm trying to improve my French, so good for that too!

This growing genre of multi-layered crime drama is seldom done badly. The Danes seem to be the best at it but the French are not far behind. Are they really as patriotic as they seem in films? A little bit worrying. This is a sub-titled film but personally this doesn't bother me, in fact I often forget whether films were subtitled or not.The main layer of the film is a whodunnit of a murder. Other layers include romance between detectives, tension between friends, high-level corruption and divorce. Some layers more interesting than others. Some bits are contrived. Overall though it is an 8 episode all-in-one view. You will not want to stop.

This is an excellent watch, I'm especially enjoying the interesting characters and storylines with a reaslistic sense of danger.

Having watched all of the series over the past 13 years I decided to go back to that start.

This should be the template for all TV Crime dramas. Intelligent, gripping, complex, strong identifiable characters and humour too, just about.

Always think it feels like a French / modern version of The Sweeney in its gritty approach. It also has the added fascination of exploring the French judicial system where the police and courts work alongside each other with the latter becoming much more involved.

This first season is incredibly dark and goes to some places that are often hard to swallow, but the frankness is actually refreshing and adds a realistic quality that is essential to the success of the series. Even our heroes are indulging in some rather unsavoury activities, making them seem so different in light of more recent seasons.

Spiral is well worth the time and each series just gets better and better.