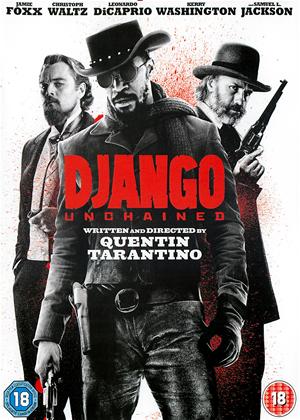 Directed by Quentin Tarantino who has a stellar reputation as a director for mixing humour (well, satirical scriptwriting anyway) often about 'unfunny' situations and with explicit violence. This is typical of his work - only this time I really didn't find it amusing at all. Yes, there's lots of trademark gun violence and bloodshed, but I was left profoundly disappointed - from the awards and they hype I was expecting something better.

The story is told in a typical Tarantino disjointed style, with unbelievable scenarios and characters. In outline, it's this: set in pre-Civil War southern USA, a German bounty hunter masquerading as a travelling dentist (King Schultz, played by Christoph Walz) frees a slave (Django, played by Jamie Foxx) to help in tracking down three wanted brothers. It is revealed that the baddies have whipped Django's wife (who just happens to be fluent in German), and after eliminating them bounty hunter + Django seek her out and attempt to free her by tricking her new owner, a baddy plantation owner (Calvin Candie, played by Leonardo DiCaprio). Much gunfire ensues with bucket loads of blood splashed everywhere.

This storyline is ridiculous, and while the viewer may be carried along by the flow of the film any attempt to sit back and analyse it reveals just how silly it is. And the repeated attempts at 'humor', often in a current-day tongue-in-cheek style, come across as false and patronising as does the repeated use of 'nigger' which while historically accurate would seem to hold some peculiar fascination for Mr Tarantino.

Another movie that proves that Quentin Tarantino is a B-movie schlock director, whose films are just derivative mash-ups of 1970s Spaghetti westerns and Kung Fu fight scenes.

I disliked this movie - though I had no issue with the use of the N word (and anyone who does, like the African American pity party industry is just deliberately seeking offence for their own ends; in fact, if anything, the brutality against slaves is massively exaggerated - did slaves really fight to the death in the drawing rooms of Southern Plantations? The dates are also vague here...);

I hated the Kung Fu style fights (with silly sound effects), the cod spaghetti western 1960s/70s titles, the ridiculous scenes etc. However, the acting is fine and there are some good scenes - which are then spoilt when Tarantino just has to have shoot-em-up BORING!

This film is also VERY long and feels it; the story should have ended after the scene with Di Caprio's Southern landowner. Good place to end and have resolution. But oh no, hack B-movie director Quentin hadn't had enough blood and guns, so we get another half an hour or more of pointless story arcs.

This movie and those like it deserve no awards whatsoever - unless there is an award for being derivative and boring.

Although I adore Tarantino's first 3 directorial offerings I do not like any of the later ones. Having read the previous reviews I really did not expect to enjoy this but I am giving this a 5 as it really is a good film. It is not however, a lightweight, feel good movie. It is a movie that rather makes me wish those sci fi offerings claiming a brutal alien race has disguised themselves as humans were true.

All the usual Tarantino light touches are there. The little boys fantasy gunfight, the one liners and the situation comedy. The KKK scene is hysterical. The story plotline is faultless and the actors are totally believable. The suffering of the slaves is in your face from the moment the film opens and does not get easier. The brutality and sadistic delight of the slave owners and handlers is a mere fact of life at the time. It still goes on, which makes this even more unbearable. Sadly the powerful will never comprehend that fine clothes and trinkets may make the man as far as shallow perception is concerned but that is not what makes a worthwhile human being. I sadly will never be able to erase from my memory the hot box or the fights to the death. The same holds for Candy's anger that his $500 fighter is a broken man after winning 3 of these fights when he expects 5 fights for his money. The fighter is torn to pieces by the dogs.

A bit gorey in places, especially one or two scenes but I found the comedy funny and the romantic story line was a good film

What a great film, watched this back to back with the Hateful Eight and preferred it.

Gratuitous violence, which is humerous also. Normally a gunshot to the head results in a small hole and the victim collapses.....oh know not in this film. How about the whole head exploding!

Also, the best death has to be Quentins cameo....get the film, I'm not going to spoil it!

In other words, I found the first 60% to 70% of the film surprisingly good and well structured, with a storyline that holds together and fair acting. But the last 30% of the film ruins it, to a large extent, because it is so excessive. You can tell that Q Tarantino cannot help it: he has to introduce some extreme and graphic violence in the story in a fairly gratuitous manner, simply because he finds it entertaining, in a way that is almost childish. The result is that the end of the film is beyond plausible and a bit nauseating.

I would still recommend the film, on balance, but it left me wishing Q Tarantino could sustain the pace and actually complete a feature film in a reasoned and consistent way: instead of being an entertaining spaghetti western, we might have had a masterpiece, which this film certainly isn't.

The best acting is L DiCaprio's, and by far, as the sadistic, yet mild-mannered, plantation owner.

An escaped slave crosses America with his companion, German Dr Schultz, a bounty hunter, in search of his wife. Written and directed by Quentin Tarantino fans of his will know precisely what to expect from one of his films but for those who are unfamiliar with the cult artist allow me to explain.

Known for his vivid use of colour, filmic homage’s, explicit violence, black comedy and genre mash up’s Tarantino has made a name for himself with darkly funny and slightly off the wall action-dramas and Django Unchained is no different. With an opening full of lurid colours that epitomize Tarantino’s auteuristic hand and the blazing heat and ruby blood of the American Deep South during the height of the black slave trade Django grabs you from the get go.

And when I say grabs you, I don’t mean a gentle tug ever insistent, Tarantino throws you straight into the story with some semi-serious violence that grabs you by the knackers and drags you into the story whether you like it or not.

With a number of fabulous performances from the two leads in particular, Jamie Foxx as Django is a work of casting genius, whilst Tarantino’s favourite stock German Christoph Waltz is brilliant as the erstwhile bounty hunter come hero. It was however Leonardo DiCaprio who most caught my attention, his portrayal of the evil plantation owner is absolutely fantastic; combining just enough tongue in cheek charm with a genuine sense of malice to bring Tarantino’s sharp and witty script to life.

With several nominations and two wins from the Academy under its belt Django Unchained is definitely a must see for Tarantino fans, and as my Mother can attest to, is a fun ride for those who usually aren’t. A word of warning to any who choose to watch it however, not only is there a lot of use of racial slurs but you should also be prepared for an awful Southern-come-Australian accent from Tarantino in his cameo role!