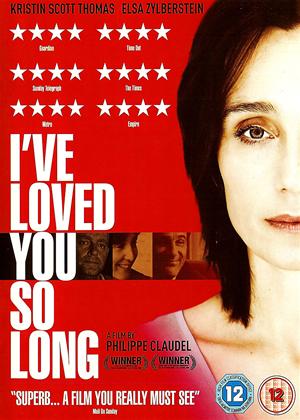 2008 Berlinale Prize of the Ecumenical Jury

Rent other films like I've Loved You So Long

This was an intense and at times very moving study of the issues - sometimes an almost unbearable intensity in an honest and very thoughtful approach. I would recommend this film. Clive Williams

Screen prescence or what? - I've Loved You So Long review by CB

Wow, has any camera been able to frame a dodgy picture of Kristin?

The film has depth and honesty. Teases out the story in a very satisfying manner. The female leads are excellent.

A superb drama, emotional and painful. Highly recommended. - I've Loved You So Long review by RP

This film won the 2009 BAFTA for 'Best Film Not in the English Language' - and deservedly so. The acting is excellent, the story emotional and painful as it tells the story of a woman attempting to reintegrate with her sister and family and their friends after release from prison.

Gradually it is revealed that not only has she been in prison but has served 15 years for murder, the murder of her 6 year old son, and in a final cathartic scene the reason is disclosed.

Kristin Scott Thomas is excellent in the lead role as is Elsa Zylberstein as her sister - they even look similar. I only wish that my French were better as I'm sure I missed some of the subtleties of the dialogue, too fast and colloquial for me. Certainly Kristin Scott Thomas' French is good - it should be as she's lived in France for some 35 years and married a Frenchman, but perhaps to a native speaker she may still show some trace of an accent - it's referred to in the film and also that the sisters have an English mother, who we briefly see in a nursing home. Part of the pain is that the parents disowned her after the murder trial, never mentioning her again.

The film brought me close to tears, particularly at the end where one line is "The worst prison is the death of one's child" - so very true.

My respects to Philippe Claudel who both wrote and directed the film - a great achievement.

Well worth watching. Excellent. - I've Loved You So Long review by blackrocket2000

A simple but moving film, well written, acted and directed. As others have said here, it is better not to know the story or the outcome. You can feel the pain, the loss and the prejudice. If you love French cinema at its best, you will not be disappointed. Don't be put off by subtitles, if you are a new potential convert. The story unfolds at a gentle pace. Kirstin S T is excellent, but you will soon be just as immersed in her sister's life.

Satisfying - I've Loved You So Long review by TM

I wouldn't get this film if you're impatient. It kept me guessing till quite close to the end so that I had plenty of time to make up theories and try to understand the main character.