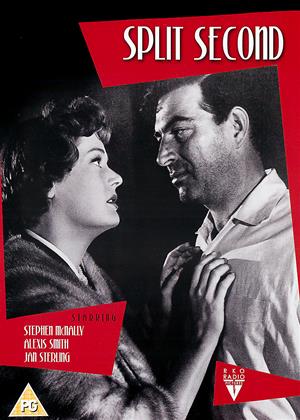 Synopsis:
Meet Sam Hurley: Public Enemy Number One. The violent killer has just busted out of jail but his buddy Bart was wounded in the escape and needs a doctor fast. Sam takes four hostages to blackmail a doctor to help, taking them to a ghost town in the desert to wait for the sawbones. But that ghost town is a dangerous place to be. The US military are testing an atom bomb at 06.00. Sam and his prisoners are sitting right at ground zero...
Actors:
Stephen McNally, Alexis Smith, Jan Sterling, Keith Andes, Arthur Hunnicutt, Paul Kelly, Robert Paige, Richard Egan, Frank DeKova
Directors:
Dick Powell
Producers:
Edmund Grainger
Writers:
William Bowers, Irving Wallace, Chester Erskine
Studio:
Odeon Entertainment
Genres:
Classics, Drama, Thrillers

This very unusual film noir puts its characters in an extremely contrived but extraordinarily tense situation: several random people are held hostage in a ghost town by a homicidal maniac who thinks it's the perfect hideout because who would look for him in a place which will shortly be destroyed by an atom bomb? Obviously he plans to leave before the explosion. Unfortunately his best buddy is too badly hurt to travel, and the clock is ticking...

Dick Powell, an actor well versed in film noir, tries his hand at directing for the first time, and it has to be said that he's not the best director in the world. The pacing is rather flat, with too many scenes in which people point out, not unreasonably, that they really ought to be thinking about not sticking around too long, what with the atom bomb and all, but not doing an awful lot about it until suddenly it's very urgent indeed. And given the small size of the main cast, I don't see why one of them, the tactfully named "Dummy", has to be a complete nonentity who can't even speak, and is implied to be retarded. What's more, the hero doesn't really make much of an impression, or accomplish all that much other than winning the heart of the pretty girl in the pointy fifties bra.

Stephen McNally steals the film hands down as the mentally damaged combat veteran who causes all the trouble, and is partially redeemed by his loyalty to his best friend, but otherwise he's so unlikeable that it's impossible to care about him. The supporting cast are a lot more interesting, since their motives are far more of a grey area, and they almost make it work. But ultimately it's very hit-and-miss, and the sheer absurdity of the villain deliberately concealing himself right next to an atomic bomb which he knows will presently go off is hard to ignore. Also, would the US Army really have left a nuclear weapon unguarded in the middle of the desert for an entire day? Then again, it's so peculiar that I kind of liked it. It's not a great movie, or in any way comparable to the ultimate nuclear film noir, "Kiss Me Deadly", but it's a fascinating oddity. And, for its time, the ending packs a real punch.