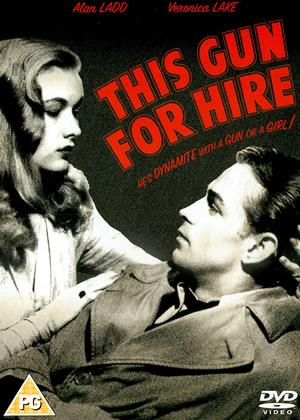 Reviews (1) of This Gun for Hire

It's often said that the test of whether an actor is suitable to play James Bond is whether you believe he'd kill you. If that's true, Alan Ladd would have been a great Bond, because he's totally believable as a killer, and, despite getting the dreaded "and introducing..." credit that usually means you'll never be heard of again, he almost completely steals the picture. It's a pity he was subsequently typecast as a hero and seldom got to play villains, because he's very good at being bad.

Veronica Lake is extremely engaging, and has infinitely more chemistry with Ladd than the charmless fellow she's supposed to be in love with - some of her declarations of affection are unintentionally funny, due to being delivered in a tone of voice more suited to "I've run out of hemorrhoid cream" - but the two of them sometimes appear to be in different movies. Ladd's ruthless but tortured hit-man isn't funny in the slightest, whereas Lake's wisecracking nightclub singer wouldn't be out of place in one of those films where a mad scientist commits murders while dressed as a gorilla. You can see her acting going up several notches every time she's on screen with Ladd, so I guess those two weren't exactly strangers, and almost everything good about this film involves either Ladd on his own or Ladd and Lake together, but by herself, she's sometimes downright odd. In particular, the fact that she sings extremely bad songs while performing conjuring tricks that are physically impossible unless she has superpowers is utterly bizarre, since it has nothing whatsoever to do with the plot.

About that plot: it's derived from a Graham Greene novel, therefore sin and redemption must be laid on by the shovelful even if Catholicism isn't explicitly involved, and since it's 1942, patriotism must be shoehorned in somehow, but the way in which Ladd's anti-hero is betrayed very early in the film for pointlessly self-defeating reasons just so that the plot can proceed is bad script-writing, as is the baffling sub-plot where a great deal of effort goes into setting up a totally implausible scenario in which a company tests a lethal chemical weapon in its own corporate headquarters just so that there can be a scene where everybody's wearing a gas-mask!

What stops this film from being the classic it's supposed to be is this schizoid quality. A scene in which practical ways to kill Veronica Lake so that it'll look like suicide are casually discussed is chilling, yet also a bit peculiar because half the time, she's in the kind of movie where something as genuinely nasty as that wouldn't even be mentioned. So all in all, it's a flawed and somewhat muddled film worth watching because the good bits outweigh the bad bits, and there are one and a half great performances.