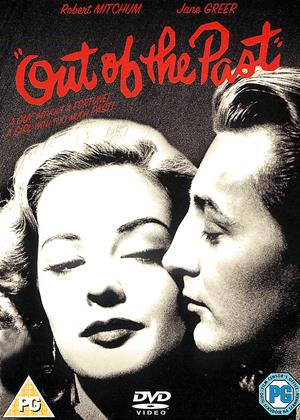 Reviews (2) of Out of the Past

Build My Gallows High, baby. - Out of the Past review by Steve

One of the very best film noirs and an American cinema classic. Robert Mitchum as Jeff Bailey owns a garage in rural California when his past catches up with him by chance. He flashbacks to when he was a PI run by a tough gangster, Whit (Kirk Douglas) to bring back Kathie Moffatt (Jane Greer) who has turned a gun on him and escaped down to Mexico with $40000.

Only when Bailey catches up with Kathie, rather than turn her in, he becomes romantically entrapped by her, leading to murder. When Whit finds Bailey many years later he attempts to exact a complicated revenge...Mitchum and Greer were such dynamite together they reformed in 1949 for The Big Steal. They are noir legends.

Though an engaging but convoluted narrative, it's the images that tell the story that stay in the mind and create a sense of the certainty of entrapment. The lovers kissing among the fishing nets on a beach in Acapulco, both under false names. Mitchum sitting in a Mexican Bar under a big neon sign, thinking he is the trap, when really it's Kathie Moffat. These images are gloriously captured by genre great Nicholas Musuraca.

The dark cynicism of the film allows in no light. Nothing can end well. The pessimistic philosophy of film noir is expressed so exquisitely visually and lyrically, especially by Bailey in the casino as he watches Kathie lose at roulette:

"That's not the way to win.

Is there a way to win?

A trenchcoat of a film. - Out of the Past review by RhysH

It is probably de rigueur to state that this is film noir and it is one of the films that sets the standard and to some extent lays out the rules of the genre. This is the film that made Robert Mitchum, maybe the word wasn't in use, in this context, in 1947 but he is the epitome of "cool". His facial expression never changes whether his life is in danger or he is about to kiss the femme fatale and his vocal register remains on one level. It is a masterclass in non-acting acting. Jane Greer's performance is also understated, it exudes eroticism without even trying. The plot is complicated but following it is not necessary to enjoy the film, the dialogue by Daniel Mainwaring (aka novelist Geoffrey Holmes) crackles along with some great exchanges. At one point, I forget the details, he says to her something like "you're quite small" and she replies "I'm bigger than Napoleon." Great stuff.