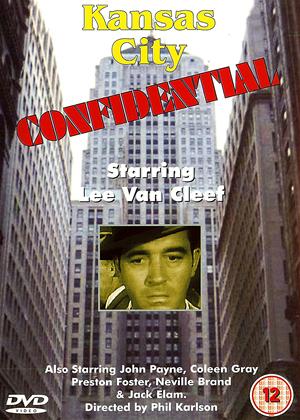 If you are a fan of film noir then this is a must see film, if not this will make you a fan. Kansas City Confidential is a typical hard boiled gangster thriller of the early 50's period. An ex-detective (Preston Foster) plots an armoured car heist and an ex-con (Robert Payne) going straight is put in the frame. When released for lack of evidence he goes after the gang. The three heavies are the nastiest bunch ever to be put together on the screen. Lee Van Cleef, Neville Brand and Jack Elam. Quite violent at times but very watchable.

Although it's sometimes listed among the greatest masterpieces of the film noir genre, I'd call this an almost-classic let down by some major flaws. The noir elements are perfect. Framed by the nastiest gang of criminal degenerates you could ever wish to see, the worst of whom is played by a very young Lee Van Cleef, then brutally beaten by a sadistic, moronic cop whose idea of an "investigation" is to hit people until they confess, our hero sets out to clear his name by catching the real culprits. And although the on-screen violence is fairly low-key and almost bloodless because it's 1952, what we do see is surprisingly vicious. These are tough guys living in a tough world, and most of them are horrible.

What lets it down is a bloated, overlong second half set in a pleasant holiday resort run by annoying Mexicans who are meant to be funny, where the surviving noir characters from the first half uneasily hang about trying to behave themselves whenever there's anybody watching as if they suspect they may have strayed into the wrong genre. I got the distinct impression that the first draft of the script was for a tightly plotted B-movie which was expanded to main feature length by padding this bit considerably. There's also an awkward romance involving a young lady who definitely belongs in a different genre, and has no chemistry with John Payne, who for a leading man has extraordinarily little charisma (not to mention a distracting resemblance to Tony Hancock).

Another serious failing is the way the identity of the crooked ex-cop who organizes the robbery is unknown to the other characters because they've never seen him without a mask, yet the viewers know what he looks like right from the start. So the very long section of the movie in which he pretends to be totally respectable, and therefore doesn't do anything interesting, seems to have been written as a whodunit leading up to a surprise last-minute revelation of who "Mr. Big" really is, from which the element of mystery was inexplicably removed. Overall this is half a superb film tacked onto half an OK one. It's not bad, but it's nowhere near as good as some critics will tell you.