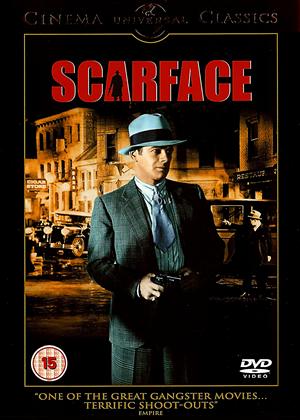 Crime Does NOT Pay! - Scarface review by Count Otto Black

This extremely violent gangster movie may be a classic, but I'm afraid it hasn't aged quite as well as some classics. It's not exactly dull; given the number of people who shoot each other at regular intervals, it hardly could be! But there are two major problems with it, which are not entirely unconnected.

Firstly, Paul Muni's performance as the title character, who for legal reasons isn't actually called Al Capone but it's not very hard to guess who he's based on, is downright odd. He's not a bad actor, and I'm sure he's only doing what Howard Hawks told him to, but he's subtle the way Vin Diesel is shy and retiring! The "Godfather" trilogy is acclaimed as two of the best films ever made (shame about part 3) because of its Shakespearean portrayal of a good man being inexorably corrupted for reasons that to begin with aren't his fault at all. But there's nothing even slightly tragic about the downfall of Antony Carmonte (Al Capone - same initials! - see?). I'm not even sure "downfall" is the right word for someone who never rises above the gutter, and Muni plays AC as practically subhuman.

He's basically a wildly exaggerated caricature of a horrible twenties gangster who almost seems comic at times. He's at his best when he gets to be genuinely menacing in a serious context, and at his worst when he has to portray Al Capone as a bragging, ignorant, moronic clown with no taste who would be a joke if he didn't kill people. They're so determined to deprive him of any redeeming features whatsoever that they come as close as they possibly can to implying that he's capable of raping his sister (this film also comes closer than any other movie from that era I've seen to having someone say the f-word - surprisingly, not Muni). Which ties in with its other huge flaw. It's preachy, and that's never, ever good. Crime doesn't pay, therefore everybody who commits it is irredeemably vile and gets their just desserts (though the cops seem scarcely more likable). And although the opening credits inform us that every event portrayed in the film is true, Al Capone was still up and running when it was made, so everything that happens to Antony Carmonte at the end is wishful thinking. Both endings, in fact - there's a really grim alternative one available on this disc as an extra.

It's lively, it's ferocious, it's got some first-class floozies, but in the end it's too one-note to make it as a true classic. And what's with the running gag about the mentally retarded gangster who is literally too stupid to answer the phone? By the way, look out for Boris Karloff as a character who is Bugs Moran in all but name; he's almost very good apart, apart from his obvious struggle not to sound English.