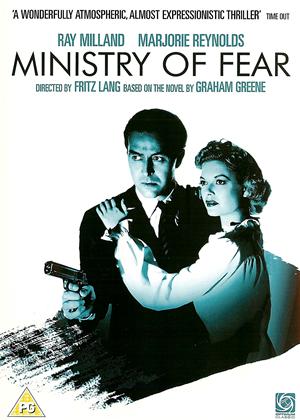 Synopsis:
After his release from the asylum, to celebrate his return to the real world, Neale (Ray Milland) visits a local carnival, only to accidentally receive the "prize" of a cake which was meant for a Nazi agent. When he discovers the error, he turns for help to a detective, whose investigations only serve to make the situation more complicated. Neale soon winds up on the run from both the Nazis and the police, who mistakenly believe him guilty of murder. He is led to Scotland Yard, where his fate entwines further with a Nazi front organization, and an unlikely love affair.
Actors:
Ray Milland, Marjorie Reynolds, Carl Esmond, Hillary Brooke, Percy Waram, Dan Duryea, Alan Napier, Erskine Sanford, Harry Allen, Frank Baker, Vangie Beilby, Wilson Benge, Evelyn Beresford, Arthur Blake, Matthew Boulton, George Broughton, Leonard Carey, Bruce Carruthers, David Clyde, Anne Curson
Directors:
Fritz Lang
Producers:
Seton I. Miller, Buddy G. DeSylva
Writers:
Seton I. Miller, Graham Greene
Studio:
Optimum
Genres:
Classics, Drama, Thrillers

Reviews (2) of Ministry of Fear

Fritz Lang's best work was in the early part of his career, when his imagination was able to run wild, using the magic-realist and downright surrealist tropes of expressionism to create such extraordinary visual spectacles that we felt we were in a strange anything-goes world where it didn't matter that the plot sometimes made about as much sense as Scientology.

Of course, for that approach to work, Lang needed the kind of budgets that weren't easy to come by in the difficult year of 1944. He was also still trying to adjust to the fact that expressionism had died along with silent movies, so bizarrely unrealistic sets and impossible plots would just seem quaint. This film is minor, watered-down Lang. A few of the old flourishes are still there. A pretentious doorbell so elaborate that the hero has difficulty figuring out how to use it looks like a tiny fragment of Metropolis smuggled into this movie as a souvenir, and he makes a half-hearted attempt to recreate his earlier magical use of models in a brief shot of a factory being bombed.

Lang has more success with those elements of his style where the budget doesn't matter, so most of the people we meet are memorably odd, and even some very minor characters have enough personality to make an impression. But even here, you get the impression that Lang originally hoped to take this aspect of the film a lot farther than the budget allowed. Two different lunatic asylums are mentioned but we never see a single lunatic, and a subplot about fake séances and the nutters who frequent them doesn't get as weird as we hope it's going to. And ironically, although the fact that almost everybody is slightly sinister keeps both the hero and the audience guessing as to which of them are baddies, Lang can't include one of his trademark over-the-top supervillains because it would make the identity of the Nazi master spy too obvious.

Ray Milland does a good job as a protagonist who, like most of Lang's heroes, is more confused and vulnerable than two-fisted he-men in spy thrillers usually are, though the nice girl he falls in love with is one of the film's weak points; the not-so-nice girl he's tempted by is far more interesting, and there's obviously far better chemistry between the actors. So although it's a decent enough thriller with plenty of twists and turns, it's nowhere near the best that Lang could do. And it's hard to ignore the absurdity of Nazi spies passing information they could simply hand to one another in an insanely convoluted way because the plot requires our unsuspecting hero to be given the Macguffin by mistake.

Alfred Hitchcock's 1959 masterpiece "North By Northwest" is so heavily influenced by this film that it's almost a remake, only with a vastly greater budget and a keen awareness of its own absurdity.

If any noir director was justified in utilising the tools of German expressionism it was Lang who was a key exponent of the style at UFA. And if there was a lot of Hitchcock in Ministry of Fear, then that was mainly because the influence was so strong the other way. The set up is pure MacGuffin (and transferred fairly faithfully from Graham Greene's novel).

Stephen Neale (Ray Milland) is released from a psychiatric hospital where he had been imprisoned after the mercy killing of his wife, and wins a cake at a country fair. The prize was supposed to have been given to a member of a group of fifth columnists because it contains microfilm of secret military designs...

Ministry of Fear is one of the very few film noirs with a contemporary WWII setting, rather than depicting the traumatised men coming home from the war; demobbed soldiers not finding the promised post war settlement. It is the visual and thematic method of the director that makes it very much noir, with the theme of an everyman trapped under the wheel of an intractable fate. Lang pins the hero in the path of his tracking shots in a mesh of shadows. There is a series of expressionist clocks that reoccur through the film reminding Neale of waiting for the death of his poisoned wife.

The film doesn't make the most of the source novel and its moral complexities are discarded leaving a chain of suspenseful set pieces. The producer of the film was also its writer, and he insisted on his version being unchallenged. The script is ordinary. It is interesting that Lang was seriously investigated for killing his wife back in Germany in the early twenties, which must have made this project unusually personal.