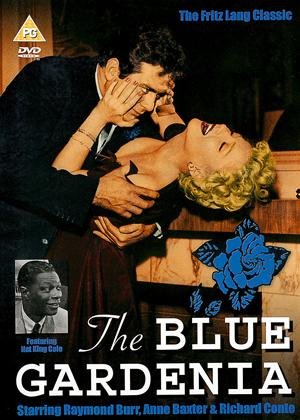 Synopsis:
The film is Fritz Lang's seventh Hollywood feature, made in 1953 on a miniscule budget and shot in just twenty days by one of the best 'noir' cameramen Nicholas Musurca and is considered one of his best murder mystery films. Norah is a pretty telephone operator engaged to a soldier posted overseas. When she receives a letter from him ending their engagement, feeling despondent, she falls for the charms of Officer Lothario and agrees to a date. They go to the Blue Gardenia Club, where he gets her drunk and then takes her back to his apartment.
She is later forced to fight off his lecherous advances by bludgeoning him to death and flees, leaving behind her handkerchief, high heels and a blue gardenia at the scene. She awakes the next morning remembering nothing while a nationwide murder hunt gets underway, but journalist Casey Mayo offers his support and suggests an interview in exchange for a fair trial.
Actors:
Anne Baxter, Richard Conte, Ann Sothern, Raymond Burr, Jeff Donnell, Richard Erdman, George Reeves, Ruth Storey, Ray Walker, Nat 'King' Cole, Fay Baker, Robert Bice, Larry J. Blake, Lela Bliss, Gail Bonney, Edward Clark, Mike Donovan, Frank Ferguson, Sam Finn, Elizabeth Flournoy
Directors:
Fritz Lang
Voiced By:
William Phipps
Writers:
Charles Hoffman, Vera Caspary
Studio:
Blackhorse Entertainment
Genres:
Classics, Drama, Thrillers

Reviews (1) of The Blue Gardenia

I'm amused to see that the person who rattles off these frequently inaccurate and spoiler-filled synopses copied this one so carelessly that he or she thinks there's a character in the film called "Officer Lothario"! You may also have noticed this film is described as "one of the best murder mysteries" made by a director far better known for his work in other genres who only shot a handful of films you could honestly describe as mysteries about murder, and we're told how little time and money were spent making it. Not much of a sales pitch, is it?

Unfortunately it's accurate, because this isn't much of a film. It's not terrible. If this site allowed reviewers to neither like nor dislike a movie I'd give it two and a half stars, and if it was by some second-rate hack I'd give him three for the moments of genuine artistry. But its director was Fritz Lang, an actual genius, and irrespective of how low the budget was, if this was the best he could do he wasn't really trying, and fans of his truly great work will be sadly disappointed.

If you're familiar with the conventions of cinema in general and the very strict self-imposed morality Hollywood forced all its directors to conform to in the early fifties, you won't find this film much of a mystery either, but to avoid spoilers for viewers who might not know the Hays Code's rules about murder I'll say no more. Besides, that's a minor objection compared to this movie's main problems. The tone is horribly uneven, juxtaposing the tormented heroine's anguish over the murder she may or may not have committed but certainly thinks she has with the antics of her two flatmates who think they're in a comedy, one of whom in particular is a waste of space we're supposed to find amusing because she's a shallow idiot with one and a half personality traits. Attempted rape is preceded by an overlong and badly-acted drunk scene that's mostly played for laughs. And although it's a pleasant enough ballad, you may get a little tired of Nat King Cole's "Blue Gardenia" song before the end. It's so overused that, in the film's best and subtlest joke, a plot-related excuse is found for one character to literally jump out of his seat in amazement when a different piece of music starts playing.

But the film's worst failing is how watered-down and lightweight it is compared to other Fritz Lang movies with similar themes. You can see what he's trying to do by making the story primarily about the inner turmoil of a woman who has (maybe) committed a murder rather than the cops trying to catch the killer, but you know what? Lang did the same thing a thousand times better in "M", the main character of which is a madman tortured by self-loathing who compulsively murders children. And he made that way back in 1931. The person who comes out of this half-hearted film with the most credit is Nat King Cole. His job is to sing a song, and he does it to the best of his ability. As for Fritz Lang, he later admitted that he didn't particularly care about this movie and only did it for the money. I believe him.