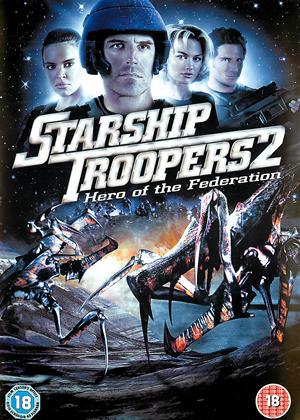 Synopsis:
In this rapid-fire sequel to the cult favourite, 'Starship Troopers', the Federation's best Mobile Infantry unit goes back into action against the Bug horde. But this time, the Bugs are waiting for them. Trapped on a remote outpost light years from the nearest reinforcements, a small group of soldiers fight an enemy smarter and more cunning than any they've ever faced. Now they must join forces with an infamous traitor to the Federation if they are to have any hope. And it's not just their lives at stake, it's the survival of the human race. If they want to live, they'll have to use their heads before the Bugs do!
Actors:
Billy Brown, Richard Burgi, Kelly Carlson, Cy Carter, Sandrine Holt, Ed Lauter, J.P. Manoux, Lawrence Monoson, Colleen Porch, Drew Powell, Ed Quinn, Jason-Shane Scott, Brenda Strong, Brian Tee, David Wells, Tim Conlon, Bobby C. King, Stephen Stanton, Ryan Bosch, Jon Davison
Directors:
Phil Tippett
Producers:
Jon Davison
Voiced By:
Stephen Stanton, Jon Davison
Writers:
Edward Neumeier
Aka:
Starship Troopers 2: Hero of the Federation
Studio:
Sony
Genres:
Action & Adventure, Horror, Sci-Fi & Fantasy, Thrillers

Not a patch on the original - but it's not that bad :) - Starship Troopers 2 review by RP

The first film in this series, 'Starship Troopers', is an excellent big budget, lots-of-effects space fiction film with much irony and satire on a future society. It was directed in 1997 by Paul Verhoeven who had previously directed 'RoboCop' and the original 'Total Recall'.

After a gap of 7 years came this low budget direct-to-video so-called 'sequel', this time directed by Phil Tippett, who has a decent pedigree since he supervised the creature effects on the original film and won an Oscar for the effects in 'Jurassic Park'. And to be fair, the creature effects here - although on a much more modest scale - are quite reasonable.

As a 'sequel' it's only the creatures that are anything like the original film. Only one actor from the earlier film is here (confusingly playing a different role) and the story has nothing in common - it's like an old-fashioned western, with a (sort of) cavalry detachment holed up in a fort while surrounded by marauding Indians and awaiting rescue. Here, it's a detachment of Mobile Infantry holed up in an abandoned outpost surrounded by arachnid aliens and awaiting rescue.

The film is essentially in three acts: (1) infantry under attack in pitched battle followed by retreat, (2) survivors secure position in abandoned outpost, (3) attack from within by aliens. This third act is more of a horror film rather than sci-fi in nature as the infantry are infested by aliens who take them over one by one.

The film has received some extremely poor reviews - but I think that's a little harsh. It really suffers in comparison to the original, but put that from your mind and it's a pretty run-of-the-mill creature feature with added horror and a bit of nudity thrown in for good measure. I've seen an awful lot worse and I didn't hate it too much so I'll give it an over generous 3/5 stars.