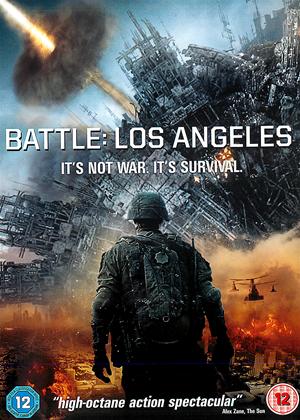 This will certainly put you to sleep! - Battle: Los Angeles review by CS

If you are a fan of the current rage for cheap, badly made, documentary style, sic-fi movies that have been coming out in the last few years, then you will love this film. If not, then like me you will find it an immense bore.

There is nothing original about this film at all. It is like a poor mans 'Independence Day', pinching much of the theme from ID and many other sic-fi movies that have gone before.

There is literally no script, as it's that bad, the direction, acting, everything about this film is awful.

Imagine someone with a camera following around a crew of US Marines, fighting lots of baddie aliens, in a cowboy style shoot out and that's it basically.

The CGI is very poor, as you kind of do but don't see the aliens and spacecraft. By that I mean you do see them, but the CGI is of such poor quality that is is difficult to make out what the aliens or their spacecraft actually look like.

It's also very vomit inducing, with the good ole US of A, once again, saving the day. Lots of American patriotism throughout that's thickly spread on to such a degree that it could actually put none USA citizens off, it did certainly make me want to vomit with it's over the top patriotism, or as the soldiers themselves kept saying every five minutes "hurrah!!"

I forced myself to watch this film, as half an hour in I was bored and it didn't get much better. I suggest you save your money and get something else to watch instead!

Disappointing. It's hardly a sci-fi film – it reminded me more of 'Black Hawk Down' crossed with an army recruitment film. Marines fight enemy invaders, who could have been anybody / anything. The fact that they were aliens hardly entered into it. And what we see of the creatures is hardly scary – or even interesting. The shaky, hand-held camera work is very overdone. However, the scenes of a devastated city are quite well done, the shooting action is non-stop, and if you like 'boys' films you might like this. But a decent sci-fi film it isn't. 2/5 stars.

Do the military and aliens mix?

That’s like asking if it’s okay to put out fire with gasoline – something’s bound to blow up.

In ‘Battle: Los Angeles’, an invasion is happening at the heart of modern-day LA and at first response, the US marines believe it’s another country invading their territory. Wrong. It’s really extra-terrestrials invading Earth for reasons unknown to everyone. But the threat is here, the mission is clear, and what you get is an explosive war of the worlds.

‘Battle: Los Angeles’ is directed by Jonathan Leibesman who was inspired by the filmic, documentary-style of ‘Black Hawk Down’, ‘Saving Private Ryan’, and ‘United 93’; now take that and throw in humungous CGI aliens, riveting action, and a lot of firepower, you get ‘Battle: Los Angeles’ – another humans versus aliens movie in the vein of ‘District 9’. The difference is, ‘District 9’ portends to humanity, the type which pierces through the heart with quiet sentimentality, with aliens and alien invasion as its incidental backdrop (think Steven Spielberg’s ‘E.T.’ or Shia LaBeouf and Bumblebee in ‘Transformers’). The equivalent to this in ‘Battle: Los Angeles’ is how the marines led by Sgt. Michael Nantz (Aaron Eckhart) put a premium on camaraderie and sense of duty. But at the end of the day, it’s essentially movie popcorn gold that’s more concerned with producing Ka-Boom.

Aaron Eckhart, although playing an action-hero (his first), does not break away from his character acting – his forte, really. Within the bizarre setting, getting thrust in the most violent/ridiculous situations against aliens, Eckhart manages to keep a straight face through it all. And for good measure: he plays a marine old-timer with emotional baggage surrounded by rookies Michelle Rodriguez and singer Ne-Yo, his total opposites. They’re willing to kick ass for the sole reason of kicking ass. Eckhart’s character seeks redemption and for some reason, a close quarter battle with war-freak aliens is the answer.

The movie ‘Battle: Los Angeles’ is a watered-down version of alien invasion tropes. It’s a case of doing too much and saying very little.