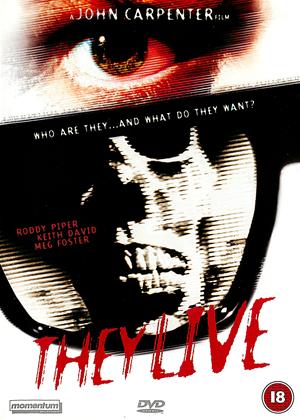 Reviews (4) of They Live

A great 80's horror/thriller. - They Live review by CP Customer

This is a great 80's sci-fi horror thriller, very much in the same vein as "V", with aliens living amongst the human population controlling everyone with subliminal messages through the advertising and the media. Even though it's now over 20 years old, watching it today it was still as good as I remembered seeing it as a teen.

Worth seeing, but not one of John Carpenter's best - They Live review by RP

I watched (and was disappointed by) 'The World's End' a week or two ago and started to wonder about other films with a similar 'aliens among us' theme. The obvious ones include 'Invasion of the Body Snatchers' and 'Alien Nation', although in the latter their presence is well known. Then I came across 'They Live', directed by John Carpenter.

John Carpenter is well known for his cult sci-fi / horror films from the 1970s and 80s. Examples of his work include 'Halloween', 'The Thing', 'The Fog', 'Starman', 'Escape from New York' as well as the excellent original classic version of 'Assault on Precinct 13', so I knew the likely style.

The central character (played by ex-wrestler Roddy Piper) suspects something strange is going on at a local church and hears a blind preacher telling people to 'wake up'. He finds a pair of special sunglasses that reveal the truth - advertising hoardings with instructions to Obey and to Conform, magazine pages with similar authoritarian instructions, TV programmes with the same message - and aliens with skull-like faces everywhere. It transpires that the Earth's ruling classes have conspired with the aliens to make money and consolidate their own power while (of course) keeping the workers in their place...

It's all a bit clumsily done and it certainly looks dated, but I quite enjoyed it. It also features Carpenter's signature style of self-composed synthesiser-driven them music, but the film isn't a classic as some of his others turned out to be.

An interesting curiosity - worth seeing, but not one to watch again and again. 3/5 stars.

Great idea but disappointing execution - They Live review by ec

The actual theme of the film rings chillingly through however it does feel like a very low budget production with a weakly enacted storyline.

This late 80s film is very dated but was when it was released too - compare to Back to the Future which was made a couple of years earlier. This is like a 70s movie with 80s mullet hairstyles! It';s simple incredible plot reminds me of a Star Trek episode from the late 60s or even Twilight Zone from 1950s,

Having said that, the central concept is great and well done in most part - pre-CGI effects work just fine too. The sunglasses 'reveal' moments of the characters in the early 2nd act work well, as sci-fi and satire on our consumerist society.

Nor so effective is a ludicrous rehearsed fight scene which drags on so long I actually started laughing during it. Then there are all the plot holes - eg the supposedly advanced aliens with superior intelligence who have a transmission station which is so vulnerable.

This is a B-Movie. Take it for one, and you'll be happy; expect more and you'll feel cheated.

And I still think the best thing John Carpenter ever created was the Halloween soundtrack.