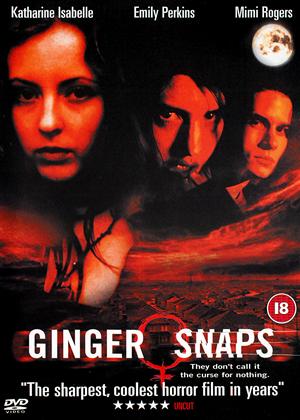 Synopsis:
Plagued by the adolescent woes of biology, high school, dating and parents, the Fitzgerald sisters, Ginger and Brigitte, are looking for something to stir up their mundane existence. However, they get more than they bargained for when Ginger is attacked by a snarling Rabid beast that generates a tremendous "change" in Ginger. The terrifying force quickly takes hold of Ginger's body and mind, threatening to destroy the sisters special bond and the lives of those around them. As Ginger becomes a ferocious She-Wolf who is out for blood, Brigitte races to devise a potion to rid Ginger of her demon.
At the eleventh hour of Ginger's metamorphosis, the creature inside her takes over and finally turns on Brigitte. Who will triumph in this life and death struggle between the best of friends and the closest of sisters?
Actors:
Emily Perkins, Katharine Isabelle, Kris Lemche, Mimi Rogers, Jesse Moss, Danielle Hampton, John Bourgeois, Peter Keleghan, Christopher Redman, Jimmy MacInnis, Lindsay Leese, Wendii Fulford, Ann Baggley, Graeme Robertson, Maxwell Robertson, Pak-Kwong Ho, Bryon Bully, Steven Taylor, Nick Nolan, Joey Paul Gowdy
Directors:
John Fawcett
Producers:
Karen Lee Hall, Steven Hoban
Voiced By:
Lucy Lawless
Writers:
Karen Walton, John Fawcett
Studio:
Mosaic Entertainment
Genres:
Horror
Countries:
Canada

Sign up
A Nightmare on Elm Street 2: Freddy's Revenge

I had recently seen lead actress Katherine Isabelle (who plays Ginger) in the rather bizarre 'American Mary' so looked up her other films and found this one. And it's rather good.

Yes, I suppose it could be described as a 'teen horror' or even a poor girl's 'American Werewolf in London' but I really liked this low-budget Canadian shocker.

The story goes like this: the Fitzgerald sisters, Ginger and Brigitte (Emily Perkins) are school students who do a photo series of realistic fake death scenes for a school project. Meanwhile, local dogs are found half eaten and Brigitte is bullied. Then Ginger (of course) is bitten by a passing werewolf, starts to grow hair (of course) in strange places - and indeed a tail! - becomes attractive to boys, and (of course) begins to take revenge, while all the time her sister is searching for a 'cure'.

Despite the fairly standard storyline the film stands out from similar teen-scream films. The transformation sequence is well done, Ginger/werewolf is scary, there's plenty of blood and guts, and although there is much squealing of teenage girls and a bit too much f-ing and blinding for my taste the film is rather well done.

This isn't a bad horror film , yes it probably what you call a teen horror but its done very well , and for me a lot better than twilight.