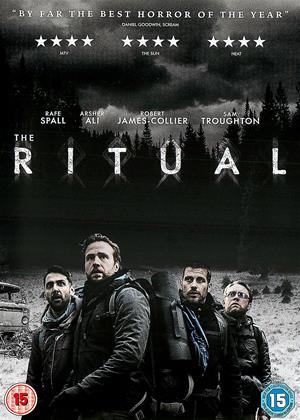 Reviews (4) of The Ritual

Based on the excellent book by Adam Nevill and adapted by Joe Barton (and co-produced by Andy Serkis), this story focuses on four associates who go on a hiking expedition in Sweden. Apart from anything else, they come to honour the memory of deceased pal Robert (Paul Reid). Luke (Rafe Spall) holds himself responsible for his friend’s death (there’s a constant melancholy behind his eyes) and there is an underlying animosity from the others because of the incident.

This fuels some friction between the group, who otherwise swap some genuinely funny banter and are a believably close-knit gang of long-term friends. We have sensible Hutch (Robert James Collier), whinging Dom (Sam Troughton) and pessimist Phil (Arsher Ali) – finely drawn out characters played to perfection.

The first two thirds of the film concentrate on a slow-burning realisation that they are far from alone in this vast, oppressive, beautiful wilderness. They suffer, do these lads, with some pretty gruesome and hallucinogenic set-pieces. This is Blair Witch ‘turned up to 11’ in many ways, and is genuinely creepy.

The final third concentrates on Luke and the weird community of locals he meets. This is a comparatively rushed second act – we never really know the locals (only Sara, played by Maria Erwolter, has any decipherable lines). The creature responsible for the varied graphic happenings isn’t revealed until late on, but is highly impressive.

I think that apart from the location, the sound design is the star here. There are some truly gut-wrenching noises and jump scares that don’t rely on the over-used screeching violin/Psycho-scare noises that soundtracks often saturate scary moments with. The whole production sounds incredible. And it looks overwhelming too - David Bruckner directs beautifully throughout.

For anyone who has read the book, there may be disappointment at the moments that have been excised. I won’t expand on that – both book and film are more than worth your time, with neither simply a re-tread of the other – but it is interesting to compare and contrast.

Ultimately, I really enjoyed this. The build-up, in both character and horror, is exceptional. Only the film’s ending comes as a let-down, and by that time, it is far too late to turn back.

Ritual ... - The Ritual review by porky

At first I thought I had made a terrible mistake, looked like being a real BOYS Movie, Lads weekend away ,Drinking,Talking Girls and Cars etc... Thankfully it became soo much more .

Wonderfully Atmospheric Forrest Romp. slight build of panic being Lost in the woods and the possibilities of being Tracked.

Certainly one of my Favorite Films so far this year . and well worth seeing more than the once .

This is what the Blair Witch SHOULD have been .... Far superior movie, far more strange and far more original.

One to swerve - The Ritual review by EW

Oh dear..3rd rate "B" movie..cliche after cliche..monster and weird woodland folk laughable..this tale of friends on jolly romp going wrong has been done many times and much better.

Excellent, very effective, low budget British horror movie - though loses it in the third act - The Ritual review by PV

At first, I thought this movie would be a typical tedious Britflick low-budget horror BUT a great inciting incident, and the following trek to the Swedish forested wilderness gave it an unusual angle. Filmed in Romania by the way, not Sweden.

The ideas are not new at all - haunted house, spooky forest, witch craft etc - BUT the first and second acts were SO effective and being scary and spooky, it doesn't matter! The dialogue is crisp and realistic, as are the characters (except the need to tick diversity boxes with ethnic characters which did jolt me out of suspended disbelief really - just not necessary and one wonder if they were that in the original novel). The trick is to scare with atmosphere - the spooky forest and moving trees, growls of something in there, strange symbols and dreams.

Then the last act somewhat spoils it - but I suppose younger audiences will want the full money shot, to see the beast. It was so-so but a couple of plot holes yawn out during that final third.

However, all in all a decent movie - and one I think lesser low-budget movies like Jurassic Predator, with its opening scene, have stolen from.