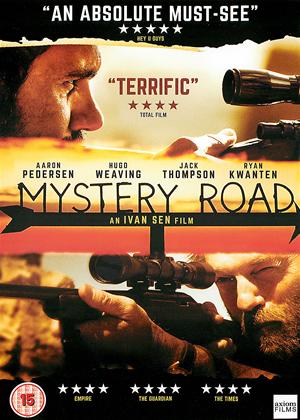 This film has NO subtitles available but possibly the quietest volume of any DVD I have ever watched - not a good combination!

Having said that, it is a highly interesting and unusual film, with a superbly understated performance by the main character, a mixed-race police officer.

The landscape of smalltown Australia (Queensland) and Aboriginal community issues make an unusual backdrop and a welcome change from the usual LA and New York set cop dramas and the endless harping on about racism in the USA.

Having said that, the film is confusing - it tries to pack too much in, with undeveloped subplots of a 'Hound of the Baskervilles' type dog, and what happens to the main character's daughter. The plot is at times vague and confused, involving missing Aboriginal girls, drug dealers, dog breeders etc in a way I never truly understood.

The end packs a punch, however unrealistically.

A movie I'd like to watch again (with subtitles!)

I liked this film - the setting was different, the main character had his own crosses to bear, home family troubles, his own people and colleagues didn't really like him but he was trying to do a professional job and the plotlines were very believable in such an out-of-the-way town. As others have described, some of the plotline strands didn't have an ending, which was mildly irritating, but this was a believable film, despite being not as thrilling as the description of 'thriller'. I had no problems with the sound nor the dialogue and a characterisation plot twist at the end in the denouement wasn't seen by me.

This is a thriller which makes the serious mistake of not actually being thrilling until the last 15 minutes, before which almost nothing happens. The previous reviewer mentioned a problem with the sound which I personally didn't experience, so maybe there's one defective DVD out there, but I could have done with subtitles anyway because the thick Australian accents are at times hard to understand. But more importantly, almost nobody in this film is even remotely likable. The hero is a bit of a nonentity who we're supposed to automatically like because he's a black man in a racist society standing up for what's right, but that's no substitute for good scriptwriting, and virtually everybody he meets is either irritating or evil.

There's also a major problem with the crimes he's trying to solve. We're expected to care about murder victims we know almost nothing about, including a dead cop who isn't in the film at all, there's something about drugs which the hero eventually finds, apparently by magic, by which time I'd forgotten why they were supposed to matter, and a very weird subplot about hunting humans with genetically modified superdogs is repeatedly hinted at right from the beginning but goes literally nowhere at all, presumably because at the last minute it turned out to be too expensive to show on screen. Aaron Pedersen is probably a good actor, but the script gives him far too little to work with. It's the kind of movie in which howling great clues are clumsily signposted early on, then not mentioned again until the very end, by which time we need to stop and think why we're supposed to remember this detail which, the way things work out, doesn't really matter anyway, except to indicate that the people we've just found out are guilty are in fact even more guilty of the same crimes.

This is a slow, dull film with an abysmal script which I would have rated even lower if its heart wasn't clearly in the right place. If you specifically want to watch a thriller about endemic racism in the Australian police force (a rather small genre, but each to his own), you'd probably have much more fun with "Red Hill", which may not be the best movie in world, but definitely does what it says on the tin, and doesn't make you wait almost two hours before the bullets start flying. By the way, if you're the kind of scriptwriter who has the hero arrange to meet some people at Slaughter Hill near Mystery Road to sort out a crime that occurred at Massacre Creek, you really ought to be writing scripts which contain at least one deliberate joke.

This film about an indigenous detective trying to solve a murder case in the Australian outback has its admirers among jaded critics. Perhaps it enabled them to catch up on some sleep. There may be a good film trying to get out here but it’s stifled into submission by the treatment.

It’s one of those affairs where everyone speaks oh-so-deliberately with long pauses in conversations and lingering looks. There’s no drama, no thrills, no intensity, no pace. The story’s minimal. There’s not even any music to brighten things up and trigger some emotion.

Writer/director Ivan Sen hasn’t yet learned how to use a movie camera. The clue’s in the word ‘movie’. He mostly just plonks it down in front of someone speaking. And he can’t even frame that with any visual interest.

There’s a shoot-out at the end but who cares? It’s soooooo slow. Well done if you can keep your finger off the Fast Forward button.

TV-style movie with by-numbers direction and writing. The story is simplistic and repetitive, with seemingly endless car rides and visits to run-down shacks that all look alike. The sub-plot of estranged wife and rebel daughter is straight out of the cliché manual. The final shoot-out, supposed to be between professional cop and professional crooks, looks like a blind gun battle from the Beverley Hillbillies. Overlong by about an hour.

Outback, And Out Of Patience. - Mystery Road review by NC

Maybe this film would have been better if the cast didn't whisper and mumble inaudibly throughout. Maybe if the characters were individuals, and not just interchangeable rotten eggs (even the hero postures as a he-man, despoiling the environment with broken glass as he shoots bottles with a prized high-powered rifle). Maybe if the subplots meant anything instead of disappearing as if those responsible hoped no-one was taking too much notice. Maybe if the final shoot-out wasn't of 'Deputy Dawg' ludicrousness.

There is a bit of an effort here and there. The harshness and hardness of life in outback towns; the vicious primitivism and prejudice which may be a consequence but certainly not an excuse; the well-caught scenery within and without the town.

Reading a synopsis afterwards I realised I had not only got two of the houses mixed up, but also two of the characters. The fact that it didn't matter says more about the film than it does about my inattentiveness.

Start with the TV Series - Mystery Road review by SC

As an avid watcher of the two TV series and the second film Goldstone, I was looking forward to this. This is an outback story framed as a Western and it works if you like westerns.

This film was disappointing despite the gorgeous visuals as possibly the slowest film I’ve seen in the last 10 years.

My advice would be to start with the TV series  - they are a great watch. Or go to the second film if time is short.