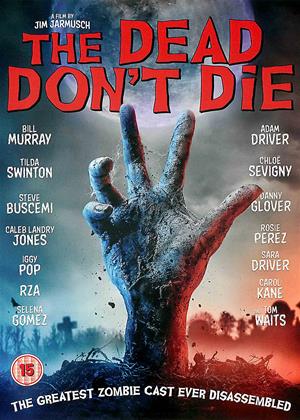 I watched 40 minutes of this then gave up - IT IS AWFUL. A silly horror spoof which thinks it is so funny but isn't.

Typically Jarmusch slightly off the wall take on the old Zombie Apocalypse Trope.

Very Slow Moving Characters take the Zombie Build up in at Dreamlike Slowness, Reacting as if on Slowdown Drugs in a small town where Nothing much Happens.

Funniest scene in my mind was the New Wave makeup in the morgue scene .

Zombies Take Over with almost No Resistance and the Locals just walking Blindly to their Deaths .

Watchable but only just....you may feel like turning it off half way through out of Boredom .

'Shaun of the Dead' on tranquilisers, and minus the jokes - The Dead Don't Die review by LC

The only thing of note in this film are the huge number of big-name character actors - how they agreed to do this project, God only knows, as the script is a boring mess. For the first half of the film, I was willing to forgive the pace as a slow-burn build up, but even when the zombie apocalypse breaks out in full, everything remains sedate. The two main characters drift through events as though sedated on tranquilisers, raising a mildly ironic eyebrow at the events that occur around them, so thre's no real drama here. The postmodern idea that the characters are aware that they are in a film seems potentially interesting, but, like much else in this film, it doesn't really go anywhere. Characters are introduced, and then discarded in flat and uninteresting zombie attacks, or off-screen in some cases (and what was the point with the strand of kids in the detention facility? The storyline literally goes nowhere). There is no new slant on the zombie genre (the final tacked on linking of zombies with consumerism is lifted straight out of Romero's 'Dawn of the Dead'), and the cheap CGI effects mean there isn't any entertaining gore either.

None of this would matter if the script was funny, or clever, but it isn't - and all the great actors in the world can't help that. Stick to 'Shaun of the Dead', or 'Zombieland', and avoid this mess.

Blimey this film is rubbish, very slow, very boring! With all the famous people in this we were all very disappointed.

Probably not up there with some comedy zombie films, there are still things I liked about Jim Jarmusch's latest. Tilda Swinton as a Scottish samurai mortician, an affable Danny Glover, Steve Buscemi as a bigoted farmer, a sexy Mexican girl in hot-pants, a nerdy comic store guy everyone calls "Frodo", Iggy Pop as a zombie addicted to coffee (he was in Jarmusch's COFFEE AND CIGARETTES), Tom Waits as a hermit who comments on events, giving a final summation of our world (no expletives here), and in the middle of this mayhem, two laid-back cops, Bill Murray and Adam Driver, who deliver humour in a Buster Keaton style. In a Monty Python moment, Driver knows it will all end badly because Jim showed him the script. Yet Tilda's sudden exit from the picture was completely unexpected.

I have always enjoyed Jim Jarmusch's films, but you have to be patient with them. He's the master of the slow-burn, dead-pan comedy, and he doesn't follow rules. And as for all those zombies in the film holding mobile phones and muttering, "Wi-Fi!" and "Bluetooth!"... Hilarious. I see them in my town every day!

I think this film is trying to be Fargo vs Planet Terror, but despite the great cast, it's crap. Utter pants.

Okay, not brilliant like Only Lovers Left Alive, but still...

Funny zombie movie or spoof of old b& w ones. Deadpan acting. Throw away lines. Tai Chi moving zombies. Explanation for zombies might be the result of fracking. I liked that idea.

casting was good, acting was good. budget seemed big. lots of zombies throughout and effects are good so I really dont understand how this movie is so bad!!!!

so boring and you never get invested in any of it. i didnt laugh or jump or get scared or worried for the cast. i just watched it thinking this should be so good but its rubbish.

honestly if like me you still watch it after reading all the bad reviews, if you dont like it after 20 mins then turn off and save your time because it doesn't get better.

I rented this film because it had Tom Waits, Bill Murray et al acting, and it was horror.

Waits’ role in the film was as an observer of the townsfolk from his home in the woods and from his perspective they all seemed a bit stupid.

The Earth had been moved from it’s axis and for some reason it had caused the dead to rise from their graves. Zombies began their usual stuff and Policeman Murray etc. tried to stave off the tide of the dead. As a Waits song this may have been quite good, but as a film it appeared to me to be lacking in substance.

It may have been about how mankind seems to be drifting towards extinction and there is a nudge toward Romero’s Zombie shopping mall but overall the film lacks conviction and the ‘irony’ just make it seem to drag.

At their best Jim Jarmusch’s films are a hoot. When they don’t work they can be painfully dull. This one is comatose. The actors stand like statues and declaim their lines as though on the brink of sleep. You’d think Jarmusch had never directed a film before. Star billing goes to Bill Murray, who looks so old and disinterested he can barely get his lines out. Ironically, the zombies have a bit more life about them, but all they do is stagger around doing the usual zombie thing. All attempts at humour fall spectacularly flat. It’s a horror show all right, but for all the wrong reasons.

Sadly it feels like Jim Jarmusch lost interest in this project. The self-referential jokes become tiring after a while, and the story literally ends in the middle.