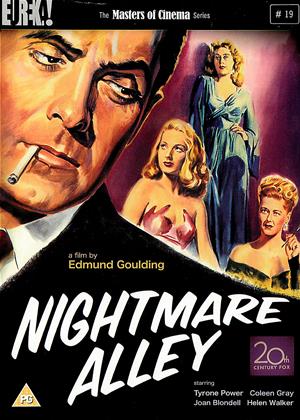 As with nearly all films that achieved cult status simply because for a long time it was almost impossible to actually see them, this one is slightly overrated. But only slightly. Tyrone Power is superb as the young man whose deprived upbringing has made him determined to be successful, famous, and above all, rich, no matter what it takes, and we almost immediately learn that he has no qualms about seducing a slightly past-it older woman for personal gain. However, he's not completely amoral, as we soon find out when he ironically gets his big break by accidentally doing something which would have been truly evil if he'd done it on purpose, and he's absolutely horrified by what he did, even though he didn't mean to. So we know our anti-hero does have a heart in there somewhere, even if it's buried under several tons of cynicism.

The film's biggest weakness is that its central character is too ambitious to remain with the seedy carnival where he starts out, soon progresses to Broadway stardom, and is even briefly the head of his own church. Had he simply become the boss of the carnival, we could have spent the entire film in the fascinatingly bizarre world of the carnies, but instead he moves on to greater things and far less interesting environments. This allows the movie to comment, very daringly for 1947, on how little difference there is between the crude fakery of a fairground fortune-teller and a certain kind of religion, but unfortunately we see far more of "The Great Stanton" doing his not terribly impressive nightclub act than we do of his fake mediumship. Nevertheless, all of this makes an interesting change from the usual people and places you'll see in almost every other film noir.

It's also genuinely subversive, explicitly telling us that psychoanalysis is just as much of a con game as dressing up as a gypsy and peering into a crystal ball, only far less excusable, and implicitly that many, perhaps all religions fall into the same category. Also, although, this being a film made in 1947, the anti-hero's downfall is inevitable because sin must be seen to be punished, it manages to sneak in a thoroughly evil character who suffers no retribution at all and actually makes a huge profit. Though I was puzzled that, in a movie where every other manifestation of the supernatural is shown to be a cheap trick, tarot cards seem to work just fine.

It's no masterpiece, but it's both a very good and a very unusual example of the noir genre that doesn't pull its punches, and Tyrone Power is perfectly cast as a not quite irredeemable but monstrously selfish man who can be utterly charming at the drop of a hat. Definitely worth seeing if you don't mind the fact that it was made 70 years ago. Talking of which, some movies that old look decidedly the worse for wear, but this digitally restored print is almost perfect.