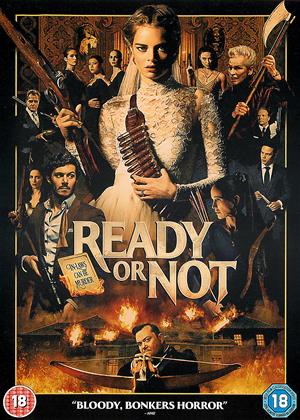 Reviews (9) of Ready or Not

Read or Not for some black humour? - Ready or Not review by KD

I thought this film was absolutely brilliant. The humour and message so well done. Loved the look and sound of it as well, the only other black comedy I could compare it to is Tucker and Dale Vs Evil for how much I enjoyed both of them.

Complete garbage - Ready or Not review by JT rentals

The picture and sound are excellent but that's about all that I can find to say that's complementary.

That anyone would write such utter drivel is beyond me, I've just wasted two hours of my life watching this. I hung on to the very end thinking that things might improve but alas it just got worse with a completely stupid ending. One best avoided.

Was expecting scares, I got laughs. Good film, and plot, strong lead, just not at all scary at all!!

Brilliantly fun horror-comedy - Ready or Not review by BG

Ready or Not tackles the minefield of tongue-in-cheek horror which can be so tricky to get right.

Luckily, it nails the tone dead-on, coming across somewhere between the 'trapped in a house' killer thrills of 'You're Next' and the sardonic wit of Daniel Craig mystery 'Knives Out'.

Samara Weaving is terrific as the lead ('Grace') who is dropped in at the deep end on her wedding night, when the game that she has to play in order to be accepted by her new In-Laws' turns out to be a life-or-death game of hide and seek.

Thankfully by this stage the sharp comical tone, edginess, and suspension of disbelief have been set up very nicely by an array of fine performances, and little dialogue ticks, habits among the family and little bickering arguments continue to crop up to golden effect at perfect moments, thoroughly enriching proceedings.

The family mansion has a lovely 'old murder-mystery' character about it, and the family are a collection of amusingly differing personalities.

Weaving is charismatic throughout, and gets great mileage out of her leading role. Adam Brody is great as the groom's deeply conflicted and messed-up brother, and although Andie MacDowell and Henry Czerny are great fun as the in-laws, Nicky Guadagni constantly threatens to steal the show as a crazed and fanatical aunt with a shock of white hair and a killer stare.

The gore is occasional but blood-soaked and cringe-inducing, the comedy is dry and knowing, and the dialogue is deliciously barbed and amusing. There is also a nice bit of back-story to make sense of the absurd game of life and death, which helps to reinforce the reasons behind the craziness.

Directorially, 'Radio Silence' (the directing team previously best known for 'Southbound' and part of 'V/H/S') shoot the film brilliantly, capturing the comedy and the violence with equal aplomb, and creating an array of shots which vary from gorgeous to look at, tension-inducing, and just plain gorgeously colourful. It's no wonder that they've been given 'Scream 5' for their next big gig, and on the evidence of this, I'm a lot more hopeful that I would have been before.

If you like horror with a frequent scattering of humour, grown-up barbed dialogue and lots of gore, there's no 'Not' about it; you're 'Ready' for this.

Good fun horror - Ready or Not review by HM

Comedy plot, but thrilling and a none stop chase movie. Good to look at, pointless swearing that didn't fit the characters, but good characters none the less. It is a thriller, bloodbath and a dash of humour, tongue in cheek kind of thing. Very entertaining and works across horror/thriller genres in Zombieland mode. Very entertaining, enjoyed it; great B movie stuff.

Laughs amongst the gore - Ready or Not review by HH

Good film with an unusual storyline. Horrible but funny, and nice to see a woman running away without falling or twisting her ankle for a change.

The acting is good and the setting really adds to the story.

A remarkable comedy thriller set in and around a big house that is everything Knives Are Out wishes it could be. Newly-wed Samara Weaving discovers on her wedding night that she’s married into a family of “psycho-killers” and they’re out to get her before dawn with an assortment of weapons they barely know how to use. Funny? You bet. One of them even has to look up how to use his crossbow on Youtube.

It’s not easy to walk the tightrope between fun and thrills, but this film finds the perfect mix, with each adding to the other. Together with great dialogue, Weaving’s naturalistic performance grounds the film in a way that cleverly heightens the increasing mayhem. With a cracking pace and directorial flair, there’s never a dull moment. Okay, so it’s a genre film with no pretensions to emotional or philosophical depth, but judged purely as a film this well deserves it’s four stars. Watch out for that rusty nail!

Annoyingly Entertaining. - Ready or Not review by RP

One of those films I hesitated to put on my long list of DVDs. I mean it is a comedy horror thriller. They never work that well. But in the end when you snort at Melanie Scrofano's character every time she is on screen and have to look away when Samara Weaving's character is climbing up a ladder and there is a close up of a nail at the top. Well it actually works well if you know what you are getting into. It is fun and silly and entertaining. It shouldn't work but it does. It is just annoyingly entertaining.

It was promising to begin with, then went quickly downhill... and the dreadful ending just topped it off... it was as if they had listened to 12 year old boys at a review who said "why don't you blow them all up at the end" - and that was that! Very disappointed.

There’s no dancing around Ready or Not’s message about eating the rich. This is a savagely blunt and brutal film that doesn’t just want to eat the elites but roast them to a crisp, devour their meat, pick your teeth with the bones, and do so with a bloody smile. And it’s one hell of a gory ride with a knowing wink and brilliant bitterness.

The Le Domas is hosting a wedding at their lavish and aged estate, where the handsome Alex Le Domas (Mark O'Brien) is due to wed the lovely and honest Grace (Samara Weaving). Alex’s family is a collective of rich snobs. Some are friendly as with the charming Becky (Andie MacDowell). Some are bitter as with Alex’s father Tony (Henry Czerny). And some just shoot Grace death-glares for the entire ceremony, as with the white-haired witch of Helene (Nicky Guadagni). All of them are not 100% on board with Grace being welcomed into the family.

There is one thing Grace can do to prove her worth. As part of the family’s superstitious legacy, all newly-wed members welcomed into the Le Domas must play a game decided from an ancient random card generator. Whichever game is drawn at midnight, the new bride or groom must play it in order to avoid a Satanic curse. Failing to play will result in murder. Grace doesn’t know this when she picks a card. She also doesn’t know that drawing the Hide & Seek card essentially means she’ll be literally hunted throughout the mansion.

If this all seems absurd, don’t worry; the film is well aware of how ludicrous this plot seems to essentially stage a slasher picture around the old game of Hide & Seek. In fact, the film plays off this absurdity for more than just a goofy gore parade, which is still a fun aspect in its own right. Throughout the film is a constant bickering of how faulty and foolish traditions can be when placed in modern setting. Tony, aiming to keep his family safe from a curse, tries to ensure that things are done the old-fashioned way, where guests being hunted must be pursued with crossbows and axes. He even turns off the security cameras to make the game fair although he later decides it might be a good idea to turn them on. “Pick and choose,” Helene bitterly gripes.

There’s a lot that can be divulged from the family’s dark nature of killing off others for the sake of their own. The motive of self-preservation is present throughout, with a rationalization that the odds of ever drawing the game of being hunted is rare but that if it comes to that than it must be done. After all, the Le Domas are very wealthy and comfy. They’re not willing to part with their ancestors’ pact with Satan at the risk of saving one life. But the film offers them no comfort or empathy; what they’re doing is evil and they more or less don’t care enough that they deserve every gory death headed their way. There’s a very bold moment when one of the Le Domas family mentions that she has kids and that they don’t deserve to suffer. After making this statement, however, she discovers her child who recently tried to shoot grace and congradulates her boy on doing what she feels is right. If evil is perputated, than perhaps the children must go when the legacy burns down.

And, wow, does it burn down beautifully in a vulgar and crass manner where Grace transforms from a glowing bride into a bloody warrior. This is a film that literally screams its message with violent vigor to let its allegory be known far and wide. If Jordan Peele’s Us was a piercing whistle at the broken system, Ready or Not is a bullhorn that literally shouts “f**k this rich” just in case it wasn’t clear. And it looks damn good doing so as well.