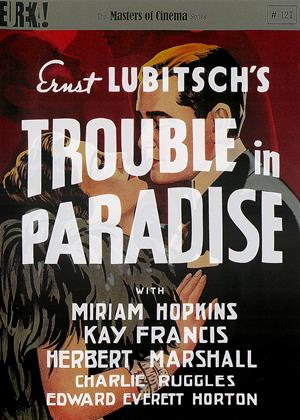 Cinemadiso's 1930s in Films Vol. 1
19 films by cinemadiso
Frankie's 1001 Movies You Must See Before You Die
982 films by frankie
PBN's Rented
207 films by pbn
Plastic Teaspoon's Rented
405 films by plastic-teaspoon

Reviews (1) of Trouble in Paradise

Miriam Hopkins and  Herbert Marshall meet in Venice as the Baron and the Countess, but soon they rumble each other as fellow thieves. They charmingly return the trinkets that they have picked from each others pockets. As Gaston Lavalle and Lily Vautier they move onto Paris and steal a diamond covered handbag from a rich perfumer, Madame Mariette Colet (Kay Francis). Lavalle finagles a job as her secretary and develops romantic feelings for her while he works on embezzling a fortune from her company.

An attachment which Miriam Hopkins just isn't going to let happen. So it's a love triangle, but with two of the angles portrayed as kleptomaniacs. They play everyone else, but they play each other too. Marshall is very much at home in Lubitsch's Paris, though Francis struggles a little in a straight role. But it's Hopkins film in a performance that goes a long way to establishing a female archetype of the screwball comedy with her ditzy, impulsive and volatile characterisation.

The dialogue is charming and witty. As in these direction from Gaston to a waiter in his hotel room: 'It must be the most memorable supper. We may not eat it, but it must be marvellous... And, waiter... You see that moon?...I want to see that moon in the champagne... And, as for you, waiter I don't want to see you at all'.

It was adapted from a Hungarian play by Samson Raphaelson, who was Lubitsch's usual partner, but apparently based on a real life Romanian jewel thief. It's a comedy of manners which also refers to Trotsky and the wages of the poor. It pays the audience the compliment of assuming it will complete the meaning of suggestions merely alluded to. Unexpected and imaginative at every twist it is the last word on the sophisticated comedy which was their milieu, a world of irony, charade and repartee. And scandal.