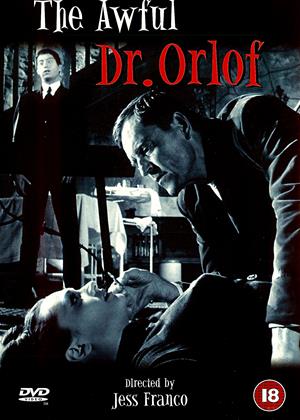 Reviews (2) of The Awful Doctor Orlof

If anyone deserves the title of Worst Director Ever, it's not Ed Wood but Jesús Franco. This is one of several halfway okay movies he made at the start of his career, but he went on to make over 200 irredeemably dreadful ones under more than 30 pseudonyms, mostly increasingly hardcore porn with bizarre horror elements. Unfortunately, "pretty good for a Jesús Franco movie" isn't the same thing as actually being good. For starters, this is blatant rip-off of the Surreal horror masterpiece "Eyes Without a Face", minus everything which makes that film so extraordinary. It has exactly the same plot, with the addition of a maniac called Morpho who does most of the Doc's dirty work. Morpho dresses like Dracula (the Bela Lugosi version) and for some inexplicable reason kills people by biting their necks, but he's not a vampire, just a psycho with very fake ping-pong ball eyes. And by the way, he's blind. Yes, that's right, the villain sends a blind man to hunt down and murder women because that's clearly the most efficient way of doing it!

Fortunately for Doctor Orlof, his nemesis is a cop who genuinely makes Inspector Clouseau look fairly efficient, because at least Clouseau's trying. This twit simply can't be bothered. Almost everyone in the film is better at his job than he is, and in order to accomplish anything at all, he has to be given lessons in basic police procedure by, amongst other people, an alcoholic vagrant and a ballerina. I'm making this movie sound hilarious, but it very seldom is, especially when it tries to be. I honestly don't know whether this character is supposed to be funny, or if he's just incredibly badly written.

Anyway, the worst policeman in the world bumbles about trying not very hard to catch two absurdly conspicuous mass murderers who make their getaway in a horse-drawn cart with a coffin in the back, because if he was any good this would be a very short film. While he does this, we are treated to leaden pacing, lifeless camera work, lousy dialogue made worse by atrocious dubbing (perhaps the movie is slightly better in Spanish, but I doubt it), terrible acting, and a conspicuous absence of actual horror. The women-in-peril scenes are so poorly shot and acted that there's zero tension, the special makeup effects are rudimentary (although the entire point of the film is that a mad doctor performs ghastly operations, none of these are shown because it would have cost too much), and there's hardly any blood. Morpho is completely inadequate as a monster (that's him at the top of the page), and Howard Vernon as Doctor Orlof is just a rather intense Spaniard with no charisma who can act slightly better than most of the cast, but still not very well. The only reason this film has an 18 certificate is a gratuitous shot of a topless woman lasting 3 seconds.

It's not unwatchable, merely flat and rather inept in every department without ever going quite as bonkers as you keep hoping it might. "Eyes Without a Face" is, in a very literal sense, the movie this is trying to be. So watch that instead.

Howard Vernon, dapper and hidden in shadows for his first few appearances, abducts silly young ladies in order to transplant their faces onto that of his scarred daughter. Vernon began his long association with Spanish Director Jess Franco with this film, often starring as main characters in often low-budget European horrors after a career playing mainly playing ‘gangsters and heavies’. As his billing in mainstream films got lower and lower, his star rose under Franco. Vernon is excellent in this, as he is in all Franco’s films – an underrated actor often starring in underrated productions.

He plays Orlof, a villain with a smattering of sympathy and a henchman called Morpho (Ricardo Valle). The practicalities of employing a totally blind assistant must be limited – Morpho’s scarred, boggle-eyed make-up is not dissimilar from that of the titular monsters in Franco’s ‘Oasis of the Zombies’ twenty years later. The name Morpho would be given to many villainous underlings in future projects.

Inspector, Tanner (Conrado San Martín), finds his time divided between this gruesome case and his new fiancée Wanda (who on occasion, bears a resemblance to Yvonne Monlaur’s character from Hammer’s 1960 hit, ‘Brides of Dracula’ – a film that inspired Franco to pursue a horror film career). Imagine if Orlof decides that she should be his latest victim!

Taking cues from ‘Frankenstein’, ‘Dr Jekyll and Mr Hyde’ and especially the French classic ‘Eyes Without a Face (1960)’ – there’s even a black cat thrown in for good measure - this is reputedly Spain’s first horror film. It is a chiaroscuro triumph, striking in black and white, almost film noir. Directed with assurance and almost completely lacking Franco’s predilection for camera zooms, ‘The Awful Dr. Orlof’ is the film that put Franco on the map – and deservedly so. Otherwise known as ‘Screams in the Night’/’L'Horrible Docteur Orloff’, there are few signs of his future in cut-price ‘exploitation’ that would become his trademarks. An entirely respectable, well played, good looking and confidently produced horror, it ticks all the right boxes and a few more besides.