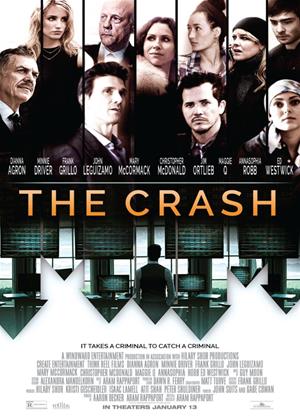 Reviews of The Crash

The Crash comes branded as a futuristic tale but only so it can weave a tale where the director has control over the next chapter of how the capitalist structure has hurt the American people. There’s a bit of a refreshing edge to such a presentation in that it strives for a major change. What’s a shame is that it’s packaged within a hacker plot that comes with all the bleeps and bloops of a silly NCIS episode.

Frank Grillo plays a hacker that formerly caused a stir when he broke into banking systems, labeled as a white-collar crime. He served his time but he’s called upon once more when a cyber attack on the stock market looms around the United States federal government. Fearing a collapse, the government task Grillo’s character with solving the problem. Grillo, usually known for his more action-oriented roles, doesn’t spend the film being a tough guy running and gunning bad guys, but constantly saddled behind computers to find a way in and stop the attacks. To do so, he also calls upon his hacker collective, including John Leguizamo as a wheelchair-bound hacker which seems to be in place as an excuse for him to call others retards.

Secretly orchestrating the attacks is Christopher McDonald, which isn’t too much of a twist of a surprise given the actor’s knack for playing scummy bad guys. He’s a great villain considering he anticipates just about every move that will be made. He plays on the paranoia to not only get his virus circulating, but convincing others to play into his hands. This comes into play with Grillo’s daughter’s boyfriend who is so freaked out by the hacker’s ability to break the system he’s frightened into sabotaging his work. McDonald even pulls one more trick out of his bag by playing directly on Grillo’s faith within the corporate structure needing to be saved.

While I do admire how the film doesn’t try to contort this tale with extra action for Grillo to showcase his mouth and muscles, it does try to make the hacker game seem more glamorous. Multiple screens for multiple machines are decked out in Grillo’s home like Christmas trees and function like touch screens, where data and colorful lava lamp visuals smear every screen. The monitors can’t just display a simple command line and multiple file windows; that command line has to be layered on top of three windows of code and given cool colors and blurs to seem more high tech. I guess the futuristic angle can also be used as an excuse for making the hacker HQ look and sounds like the Star Trek bridge.

Thankfully, if you can see through the glitz of digital sound effects and Christmas-colored command lines, The Crash does have some intriguing ideas as it heads into the third act. After sitting through loads of melodrama and Grillo looking pensive in a film where he doesn’t get to drive a car and shoot a gun, bigger themes are given a bigger voice and the dialogue becomes all the more interesting for all to combat the too big to fail mindset of maintaining banks. The film ends with a big middle finger to the structure that the only method to keep the banks in check is to let them fail. If they can’t fail, how can they do wrong? How can they be restructured or prevented from manipulating the economy? Something interesting to consider as the film meanders through its tech thriller tale.