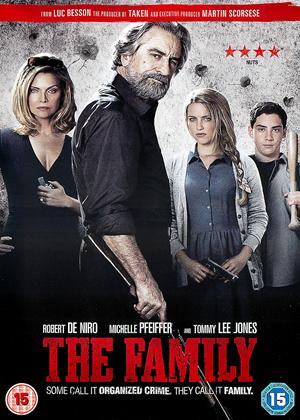 Reviews (8) of The Family

It is not unusual to see Robert De Nero tarnishing a once spotless CV but the fact that this also involves Michelle Pfeiffer and Luc Besson is more surprising. The main problem is that it cannot decide whether it is an action movie or a comedy, as a result the violence seems out of place with the tone of the movie. You feel very little empathy for any of the characters, including Tommy Lee Jones bog-standard cop and I just hope Luc Besson returns to form after classics like Nikita & Leon.

A little disappointed with this expected more from the line up of stars. Film can't decide if it's a comedy or not.

Rubbish - The Family review by JD

You are assumed to find everything that de Nero and Pfeiffer and indeed all Americans do, as forgivable and even to find acts of brutality as amusing and heroic. No work is put into building up the characters into being believable and attractive. So that when these brash Americans move into a small French village it is not forgivable to set fire to the local supermarket because they are bitchy, it is not forgivable to beat the plumber nearly to death for overcharging and it is an overreaction for a girl to attack a boy with a tennis racquet until he is severely maimed for making a pass at her. It is clumsy and unpleasant. I started looking at my watch after 10 minutes. There is no redeeming feature in this pile of rubbish.

Don't bother. I second everything the guys above me said. Massively disappointing given who was involved, no real redeeming features at all

This film does what a lot of French and continental movies do, and veers off into surrealism. Not sure if this comes from the original novel (by an Italian) or is the result of the writer/director Luc Besson going for the Grand Guignol uber-violent plot (esp in Act 3) because he can't work out how else to end the movie. And the plot point that leads to Act 3 is just about the most unbelievable one I have ever seen.

Whichever it is, this makes the movie unbelievable, and means the viewer has no sympathy at all for the amoral characters (compare with the wonderful Wolf of Wall Street to see how it is possible to make an amoral key character sympathetic so the audience roots for him).

Still, it's an interesting watch, even if it is a confused film which can't decide if it's a comedy or a mob movie. There are silly subplots aplenty to pad out the film to its overlong length.

The big problem here, however, is the fact that very few members of an audience will be able to suspend disbelief here or sympathise with the amoral and violent, nasty characters. The plot is simply incredible - I simply cannot believe the shtick that despite all the violence and deaths and explosions, this family would be able to move from house to house in France with new identities: it's like a plot from a first year film student, frankly, and with more holes than Swiss cheese!

Worth a watch, but to see some really funny mafia moments, stick to The Sopranos.

2.5 rounded up to 3 for the good acting and some funny scenes.

Trash it! - The Family review by CP Customer

Could have been a good movie if the plot had been believable and the violence more nuanced and subtle. As it stands, it is a load of brash nastiness that leaves a bad taste in your mouth. Trash it!

Pick another! - The Family review by TS

Hugely disappointing, I missed this first time around but remembered the trailer, which was infinitely more entertaining. The only word to describe this movie is 'incredulous'. Wouldn't mind but it was my first film as a member. Things can only get better.

Not too bad.. - The Family review by AS

The Family (aka Malavita) review by Alyse Garner - Cinema Paradiso

A long awaited action-comedy from the man behind the Fifth Element and Leon the Family is a bit of a diamond in the rough compared to its elder siblings; yet the latest offering from Luc Besson has moments of ingenuity and sparkle that are notable in their own right.

Having said that however Besson owes a great deal to another great film maker, with many scenes beautifully inspired by the gangster movies of one Martin Scorsese.

With a number of big names behind it, including Robert De Niro, Michelle Pfeiffer and Tommy Lee Jones the Family immediately has quite a lot going for it; couple that with it’s tongue in cheek story and the same over the top violence and horror so unashamed it is almost glorious present in Leon and La Femme Nikita it would take quite a lot of work to screw up this movie.

The narrative follows a notorious mafia family, the Manzoni’s, who are moved to the French Rivera when the join the witness protection programme. With patriarch Giovanni (De Niro) at the head as and old fashioned wise guy the family, now named the Blakes, relocate to Europe but struggle to get a handle on their old mob habits.

Though it isn’t a work of genius, there is something fun and sparky about the Family, thanks largely to an excellent performance from Pfeiffer as De Niro’s wife Maggie she can’t help but steal the show; not only is she the heart of the family but her character is often the one from whom the laughs and warmth of the film unwinds. Otherwise the film is somewhat sporadic and haphazard, the narrative meanders somewhat, not really going any in particular, but giving the audience a fun ride as they take the journey.